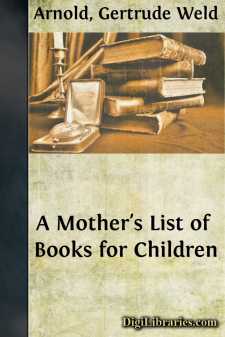 This little book, a revision of one privately printed a few years ago, has been prepared for home use, and for this reason the classification has been made according to the age, and not the school grade, of the child. But as children differ so greatly in capacity, it should be understood that in this respect the arrangement is only approximate. The endeavor has been made to choose those fairy tales which are most free from horrible happenings, and to omit all writings which tolerate unkindness to animals. Humorous books are designated by a star and the few sad ones by a circle.

The prices given are the same as those in the publishers' catalogues; booksellers' prices are often less.

My thanks are extended to those publishers who have time and again courteously provided the facilities for the examination of their publications.

Miss Annie Carroll Moore, of the New York Public Library, was kind enough to read for me the notes and comments. I wish most gratefully to acknowledge the generous assistance given me by Miss Hewins, of the Hartford Public Library, Miss Hunt, of the Brooklyn Public Library, and Miss Jordan, of the Boston Public Library, who examined the List, and suggested some changes and a few additions. Their approbation is elsewhere expressed.

It is said, in that earliest collection of English proverbs which was made by John Heywood, more than three hundred years ago, that "Children must learn to creep before they can go." This little book for which I am asked to write a brief preface is, so far as I can find out, the first consistent effort yet made towards teaching children to read on John Heywood's principle. It is safe to say that it is destined to carry light and joy into multitudes of households. It is based upon methods such as I vaguely sighed after, nearly fifty years ago, when I was writing in the North American Review for January, 1866, a paper entitled Children's Books of the Year. The essay was written by request of Professor Charles Eliot Norton, then the editor of that periodical, and I can now see how immensely I should have been relieved by a book just like this Mother's List, a device such as nobody in that day had the wisdom and faithful industry to put together.

In glancing over the books discussed in that early paper of mine, it is curious to see how the very titles of some of the most prominent have now disappeared from sight. Where are the Little Prudy books which once headed the list? Where are the stories of Oliver Optic? Where is Jacob Abbott's John Gay; or Work for Boys? Even Paul and Virginia have vanished, taking with them the philosophic Rasselas and even the pretty story of Undine. Nothing of that list of thirty titles is now well remembered except Cooper's Leatherstocking and Jane Andrews's Seven Little Sisters Who Live on the Round Ball That Floats in the Air, a book which has been translated into the languages of remote nations of the globe, I myself having seen the Chinese and Japanese versions....