A Morning's Walk from London to Kew 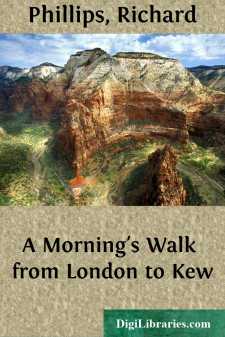 The Author of the following Observations, made during A MORNING’S WALK, will doubtless be allowed to possess but a moderate degree of literary ambition. He has not qualified himself, by foreign travels, to transport his readers above the clouds, on the Andes, the Alps, or the Apennines; to alarm them by descriptions of Earthquakes, or Eruptions; or to astonish them by accounts of tremendous Chasms, Caverns, and Cataracts: but he has restricted his researches to subjects of home scenery, which thousands can daily examine after him; and consequently has not enjoyed that latitude of fancy, or been able to exercise any of those rare powers of hearing and seeing, by means of which travellers into distant regions are enabled to stimulate curiosity and monopolize fame.

The class of readers who seek for sources of pleasure beyond the ordinary course of nature, will therefore feel disappointment in attempting to follow a pedestrian tourist through a route so destitute of wonders. Nor will this feeling, it is to be feared, be confined to searchers after supernatural phenomena in regard to the facts which appertain to such a work. In the sentiments which accompany his narrations, it will be found that the Author, accustomed to think for himself, admits no standards of truth superior to the evidence of the senses and the deductions of reason; consequently, that his conclusions on many important topics are at variance with existing practices, whenever it appears they have no better foundation than the continuity of prejudices and the arbitrary laws of custom. He therefore entertains very serious doubts whether his work will be acceptable to those learned Professors in Universities, who teach no doctrines or opinions but those of their predecessors; or whether it will suit Students, whose advancement depends on their submission to the dogmata of such superiors. He questions whether it will ever be quoted as an authority by Statesmen who consider the will of princes as standards of wisdom;—by Legislators who barter away their votes, and decide on the presumed integrity of ministers and leaders;—by Politicians who banish the moral feelings from their practices;—or by Economists who do not consider individual happiness as the primary object of their calculations. Nor is he more sanguine that his work will prove agreeable to those Natural Philosophers who account for phenomena by the operation of virtues or influences which have no mechanical contact;—or to those Metaphysicians who conceive that truth can be exhibited only in the sophistical subtleties of the schools displayed in the mazy labyrinths of folios and quartos;—or to those Theologians who maintain that the obligations of reason and morality are superseded by those of Faith. While, in regard to those Topographers and Antiquaries whose studies are bounded by dates of erection, catalogues of occupants, and copies of tomb-stones;—to those Naturalists who receive delight from enumerations of Linnæan names of herbs, shrubs, and trees, and from Wernerian descriptions of rocks;—to those Bibliomaniacs who value a book in the inverse ratio of the information it contains;—and to those learned Philologists who see no beauties in modern tongues, and affect to find (but without anticipating any of them,) all modern discoveries of Natural Philosophy in Homer, and all improvements of mental Philosophy in the mysteries of Plato—the author deeply laments his utter inability to accommodate either his taste, his feelings, or his conclusions.

In regard to the spirit, tone, and character of the author’s opinions, they have necessarily emanated from the state of knowledge, in an era when, at the termination of four centuries after the adoption of Printing, mankind have achieved four great objects; (1,) in the REVIVAL of Literature, and REGENERATION of Philosophy; (2,) in the EMANCIPATION of Christendom from the systematic thraldom of Popery; (3,) in the assertion of THE RIGHTS OF MAN, against overwhelming usurpations; and (4,) in the establishment of A SPIRIT OF FREE ENQUIRY, which constitutes the vivifying energy of the age in which we live, and promises the most important results in regard to the future condition and happiness of the human race....