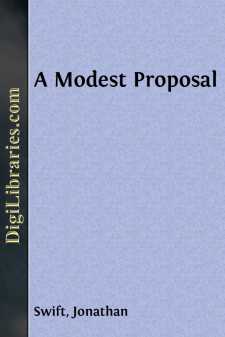 It is a melancholy object to those, who walk through this great town, or travel in the country, when they see the streets, the roads and cabbin-doors crowded with beggars of the female sex, followed by three, four, or six children, all in rags, and importuning every passenger for an alms. These mothers instead of being able to work for their honest livelihood, are forced to employ all their time in stroling to beg sustenance for their helpless infants who, as they grow up, either turn thieves for want of work, or leave their dear native country, to fight for the Pretender in Spain, or sell themselves to the Barbadoes.

I think it is agreed by all parties, that this prodigious number of children in the arms, or on the backs, or at the heels of their mothers, and frequently of their fathers, is in the present deplorable state of the kingdom, a very great additional grievance; and therefore whoever could find out a fair, cheap and easy method of making these children sound and useful members of the common-wealth, would deserve so well of the publick, as to have his statue set up for a preserver of the nation.

But my intention is very far from being confined to provide only for the children of professed beggars: it is of a much greater extent, and shall take in the whole number of infants at a certain age, who are born of parents in effect as little able to support them, as those who demand our charity in the streets.

As to my own part, having turned my thoughts for many years, upon this important subject, and maturely weighed the several schemes of our projectors, I have always found them grossly mistaken in their computation. It is true, a child just dropt from its dam, may be supported by her milk, for a solar year, with little other nourishment: at most not above the value of two shillings, which the mother may certainly get, or the value in scraps, by her lawful occupation of begging; and it is exactly at one year old that I propose to provide for them in such a manner, as, instead of being a charge upon their parents, or the parish, or wanting food and raiment for the rest of their lives, they shall, on the contrary, contribute to the feeding, and partly to the cloathing of many thousands.

There is likewise another great advantage in my scheme, that it will prevent those voluntary abortions, and that horrid practice of women murdering their bastard children, alas! too frequent among us, sacrificing the poor innocent babes, I doubt, more to avoid the expence than the shame, which would move tears and pity in the most savage and inhuman breast.

The number of souls in this kingdom being usually reckoned one million and a half, of these I calculate there may be about two hundred thousand couple whose wives are breeders; from which number I subtract thirty thousand couple, who are able to maintain their own children, (although I apprehend there cannot be so many, under the present distresses of the kingdom) but this being granted, there will remain an hundred and seventy thousand breeders. I again subtract fifty thousand, for those women who miscarry, or whose children die by accident or disease within the year. There only remain an hundred and twenty thousand children of poor parents annually born. The question therefore is, How this number shall be reared, and provided for? which, as I have already said, under the present situation of affairs, is utterly impossible by all the methods hitherto proposed. For we can neither employ them in handicraft or agriculture; we neither build houses, (I mean in the country) nor cultivate land: they can very seldom pick up a livelihood by stealing till they arrive at six years old; except where they are of towardly parts, although I confess they learn the rudiments much earlier; during which time they can however be properly looked upon only as probationers: As I have been informed by a principal gentleman in the county of Cavan, who protested to me, that he never knew above one or two instances under the age of six, even in a part of the kingdom so renowned for the quickest proficiency in that art....