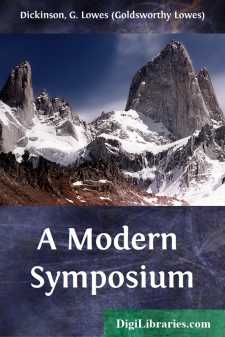 OME of my readers may have heard of a club known as the Seekers. It is now extinct; but in its day it was famous, and included a number of men prominent in politics or in the professions. We used to meet once a fortnight on the Saturday night, in London during the winter, but in the summer usually at the country house of one or other of the members, where we would spend the week-end together. The member in whose house the meeting was held was chairman for the evening; and after the paper had been read it was his duty to call upon the members to speak in what order he thought best. On the occasion of the discussion which I am to record, the meeting was held in my own house, where I now write, on the North Downs. The company was an interesting one. There was Remenham, then Prime Minister, and his great antagonist Mendoza, both of whom were members of our society. For we aimed at combining the most opposite elements, and were usually able, by a happy tradition inherited from our founder, to hold them suspended in a temporary harmony. Then there was Cantilupe, who had recently retired from public life, and whose name, perhaps, is already beginning to be forgotten. Of younger men we had Allison, who, though still engaged in business, was already active in his socialist propaganda. Angus MacCarthy, too, was there, a man whose tragic end at Saint Petersburg is still fresh in our minds. And there were others of less note; Wilson, the biologist, Professor Martin, Coryat, the poet, and one or two more who will be mentioned in their place.

After dinner, the time of year being June, and the weather unusually warm, we adjourned to the terrace for our coffee and cigars. The air was so pleasant and the prospect so beautiful, the whole weald of Sussex lying before us in the evening light, that it was suggested we should hold our meeting there rather than indoors. This was agreed. But it then transpired that Cantilupe, who was to have read the paper, had brought nothing to read. He had forgotten, or he had been too busy. At this discovery there was a general cry of protest. Cantilupe's proposition that we should forgo our discussion was indignantly scouted; and he was pressed to improvise something on the lines of what he had intended to write. This, however, he steadily declined to attempt; and it seemed as though the debate would fall through, until it occurred to me to intervene in my capacity as chairman.

"Cantilupe," I said, "certainly ought to be somehow penalized. And since he declines to improvise a paper, I propose that he improvise a speech. He is accustomed to doing that; and since he has now retired from public life, this may be his last opportunity. Let him employ it, then, in doing penance. And the penance I impose is, that he should make a personal confession. That he should tell us why he has been a politician, why he has been, and is, a Tory, and why he is now retiring in the prime of life. I propose, in a word, that he should give us his point of view....