A Military Genius Life of Anna Ella Carroll of Maryland 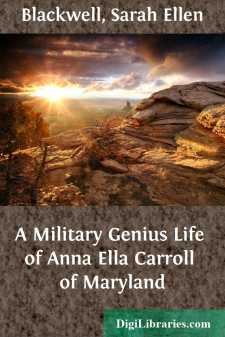 In commencing the attempt to portray a very remarkable career I had hoped for the coöperation of the person concerned so far, at least, as the supervision of any statements I might find it necessary to make. But it was decided by her friends that it would not be well for her at present to be troubled with new projects, or even informed of them. It was at first a serious disappointment to me and seemed to increase my difficulties, but as I was allowed access to sources of family information I have been enabled to present a sketch, slight and inadequate, but authentic, and greatly desired by many distant friends. With continued improvement in health I trust that the wishes of Miss Carroll's friends may be better met by an autobiography taking the place of the present meager and imperfect sketch.

It should be at once understood that this is not a plea for Miss Carroll.

Her work has but to be fairly presented to speak for itself.

Her claim was settled once and forever by the evidence given before the first Military Committee of 1871, met to consider the claim, and reporting, through Senator Howard, unanimously endorsing every fact. The Assistant Secretary of War, Thomas A. Scott, the Chairman of the Committee for the Conduct of the War, Benjamin F. Wade, and Judge Evans, of Texas, testifying in a manner that was conclusive. These men knew what they were talking about and human testimony could no farther go. Congress, through its committees, has again and again endorsed the claim, and never denied it, being "adverse" only to award as involving national recognition.

Our great generals have left us one by one without ever antagonizing the claim, and General Grant advised Miss Carroll to continue to push her claim for recognition.

But this work is to be considered rather in the light of an historical research bearing on questions of the day.

Are our present laws and customs just toward women? Are women ever preëminently fitted for high offices in the State? Is it for our honor and advantage when so fitted to avail ourselves of the whole united intellect and moral power of men and women side by side in peril and in duty? Such a life as this gives to all these questions the authoritative answer of established facts.

A SEARCH FOR THE DOCUMENTS.

Arriving as a stranger in Washington, knowing nothing of libraries and document rooms, Secretaries offices, and War departments, I was at first greatly at a loss. For many years I had had in my possession two very important documents, the last memorial of 1878 and the report of the Military Committee thereon under General Bragg in 1881. With these two in my hand I proceeded to consult the Descriptive Catalogue of the Congressional Library. To my surprise, I found that these two very important documents had been omitted from the index. Calling attention to the fact, we looked them up in the body of the volume and Mr. Spofford immediately added them in pencil together with the other important documents, in Miss Carroll's favor, which had also been omitted. When I made my way to the Senate document room I found that this important Miss. Doc. 58 had been omitted there also, having been set down under another name. Looking it up in the volume of Miscellaneous Documents I again obtained the admission by Mr. Amzi Smith. In the list at the Secretaries office Miss. Doc. 58 was also omitted together with the last report by a Military Committee, under General Bragg, endorsing the claim in the most thorough going way. The index ending with an intermediate report mistakenly designated as adverse, though the previous reports were not thus heralded as favorable.

After the first report, as made by Senator Howard and the repeated endorsements made by Wilson and Williams of succeeding Congresses, these two documents are by far the most important and interesting.

The memorial of '78, containing additional evidence explaining some things, otherwise unaccountable, and making some very singular revelations. It is a mine of wealth for the future historian....