A Midsummer Drive Through the Pyrenees 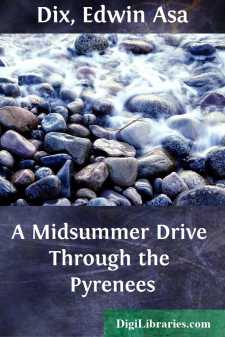 CHAPTER I. IN PERSPECTIVE.

"In fortune's empire blindly thus we go;We wander after pathless destiny,Whose dark resorts since prudence cannot know,In vain it would provide for what shall be."

A trip to the Pyrenees is not in the Grand Tour. It is not even in any southerly extension of the Grand Tour. A proposition to exploit them meets a dubious reception. Pictures arise of desolate gorges; of lonely roads and dangerous trails; of dismal roadside inns, where, when you halt for the night, a "repulsive-looking landlord receives the unhappy man, exchanges a look of ferocious intelligence with the driver,"—and the usual melodramatic midnight carnage probably ensues. The Pyrenees seem to echo the motto of their old counts, "Touches-y, si tu l'oses!" the name seems to stand vaguely for untested discomforts, for clouds and chasms, and Spanish banditti in blood-red capas; to be, in a word, a symbol of an undiscovered country which would but doubtfully reward a resolve to discover.

Yet there is a fascination in the project, as we discuss a summer tour. There, we know, are mountains whose sides are nearly Alpine, whose shoulders are of snow and glacier, whose heads rise to ten and eleven thousand feet above the sea. There, we know, must be savage scenery,—ravines, cliffs, ice-rivers, as in the Alps; valleys and streams and fair pastures as well, and a richer southern sunlight over the uplands; besides a people less warped by tourists, intensely tenacious of the past, and still tingling with their old local love of country,—a people with whom, "to be a Béarnais is greater than to be a Frenchman."

To visit the Pyrenees, too, will be almost to live again in the Middle Ages. The Roman, the Moor, the Paladin, Froissart, Henry of Navarre, have marked the region both in romance and in soberer fact. Its valleys have individual histories; its aged towns and castles, stirring biographies. The provinces on its northern flanks, once a centre, a nucleus, of old French chivalry, are saturated with mediæval adventure. One visits the Alps to be in the tide of travel, to find health in the air, to feel the religion of noble mountains. In the Pyrenees is all this, and more,—the present and the past as well. As we call down the shades of old chroniclers from the dust of upper library tiers, we grow more and more in desire of a closer acquaintance. Cæsar, Charlemagne, Roland, the Black Prince, Gaston Phoebus, Montgomery and knightly King Henry stand in ghostly armor and beckon us on.

Facts of detail prove farther to seek. We inquire almost in vain for travelers' notes on the Pyrenees. Those who had written on Spanish travel spoke of the range admiringly. But these authors, we find, invariably, only passed by the eastern extremity, or the western, of the great mountain wall; the mountains themselves they did not visit. Search in the large libraries brings out a few scant volumes of Pyrenean travel, but all, with two or three exceptions, bear date within the first three-fifths of the century....