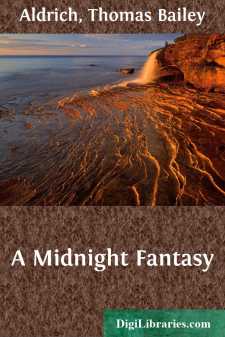 It was close upon eleven o'clock when I stepped out of the rear vestibule of the Boston Theatre, and, passing through the narrow court that leads to West Street, struck across the Common diagonally. Indeed, as I set foot on the Tremont Street mall, I heard the Old South drowsily sounding the hour.

It was a tranquil June night, with no moon, but clusters of sensitive stars that seemed to shiver with cold as the wind swept by them; for perhaps there was a swift current of air up there in the zenith. However, not a leaf stirred on the Common; the foliage hung black and massive, as if cut in bronze; even the gaslights appeared to be infected by the prevailing calm, burning steadily behind their glass screens and turning the neighboring leaves into the tenderest emerald. Here and there, in the sombre row of houses stretching along Beacon Street, an illuminated window gilded a few square feet of darkness; and now and then a footfall sounded on a distant pavement. The pulse of the city throbbed languidly.

The lights far and near, the fantastic shadows of the elms and maples, the gathering dew, the elusive odor of new grass, and that peculiar hush which belongs only to midnight—as if Time had paused in his flight and were holding his breath—gave to the place, so familiar to me by day, an air of indescribable strangeness and remoteness. The vast, deserted park had lost all its wonted outlines; I walked doubtfully on the flagstones which I had many a time helped to wear smooth; I seemed to be wandering in some lonely unknown garden across the seas—in that old garden in Verona where Shakespeare's ill-starred lovers met and parted. The white granite façade over yonder—the Somerset Club—might well have been the house of Capulet: there was the clambering vine reaching up like a pliant silken ladder; there, near by, was the low-hung balcony, wanting only the slight girlish figure—immortal shape of fire and dew!—to make the illusion perfect.

I do not know what suggested it; perhaps it was something in the play I had just witnessed—it is not always easy to put one's finger on the invisible electric thread that runs from thought to thought—but as I sauntered on I fell to thinking of the ill-assorted marriages I had known. Suddenly there hurried along the gravelled path which crossed mine obliquely a half-indistinguishable throng of pathetic men and women: two by two they filed before me, each becoming startlingly distinct for an instant as they passed—some with tears, some with hollow smiles, and some with firm-set lips, bearing their fetters with them. There was little Alice chained to old Bowlsby; there was Lucille, "a daughter of the gods, divinely tall," linked forever to the dwarf Perrywinkle; there was my friend Porphyro, the poet, with his delicate genius shrivelled in the glare of the youngest Miss Lucifer's eyes; there they were, Beauty and the Beast, Pride and Humility, Bluebeard and Fatima, Prose and Poetry, Riches and Poverty, Youth and Crabbed Age— Oh, sorrowful procession! All so wretched, when perhaps all might have been so happy if they had only paired differently! I halted a moment to let the weird shapes drift by. As the last of the train melted into the darkness, my vagabond fancy went wandering back to the theatre and the play I had seen—Romeo and Juliet....