A Message from the Sea 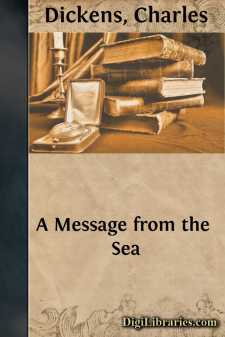 “And a mighty sing’lar and pretty place it is, as ever I saw in all the days of my life!” said Captain Jorgan, looking up at it.

Captain Jorgan had to look high to look at it, for the village was built sheer up the face of a steep and lofty cliff.  There was no road in it, there was no wheeled vehicle in it, there was not a level yard in it.  From the sea-beach to the cliff-top two irregular rows of white houses, placed opposite to one another, and twisting here and there, and there and here, rose, like the sides of a long succession of stages of crooked ladders, and you climbed up the village or climbed down the village by the staves between, some six feet wide or so, and made of sharp irregular stones.  The old pack-saddle, long laid aside in most parts of England as one of the appendages of its infancy, flourished here intact.  Strings of pack-horses and pack-donkeys toiled slowly up the staves of the ladders, bearing fish, and coal, and such other cargo as was unshipping at the pier from the dancing fleet of village boats, and from two or three little coasting traders.  As the beasts of burden ascended laden, or descended light, they got so lost at intervals in the floating clouds of village smoke, that they seemed to dive down some of the village chimneys, and come to the surface again far off, high above others.  No two houses in the village were alike, in chimney, size, shape, door, window, gable, roof-tree, anything.  The sides of the ladders were musical with water, running clear and bright.  The staves were musical with the clattering feet of the pack-horses and pack-donkeys, and the voices of the fishermen urging them up, mingled with the voices of the fishermen’s wives and their many children.  The pier was musical with the wash of the sea, the creaking of capstans and windlasses, and the airy fluttering of little vanes and sails.  The rough, sea-bleached boulders of which the pier was made, and the whiter boulders of the shore, were brown with drying nets.  The red-brown cliffs, richly wooded to their extremest verge, had their softened and beautiful forms reflected in the bluest water, under the clear North Devonshire sky of a November day without a cloud.  The village itself was so steeped in autumnal foliage, from the houses lying on the pier to the topmost round of the topmost ladder, that one might have fancied it was out a bird’s-nesting, and was (as indeed it was) a wonderful climber.  And mentioning birds, the place was not without some music from them too; for the rook was very busy on the higher levels, and the gull with his flapping wings was fishing in the bay, and the lusty little robin was hopping among the great stone blocks and iron rings of the breakwater, fearless in the faith of his ancestors, and the Children in the Wood.

Thus it came to pass that Captain Jorgan, sitting balancing himself on the pier-wall, struck his leg with his open hand, as some men do when they are pleased—and as he always did when he was pleased—and said,—

“A mighty sing’lar and pretty place it is, as ever I saw in all the days of my life!”

Captain Jorgan had not been through the village, but had come down to the pier by a winding side-road, to have a preliminary look at it from the level of his own natural element.  He had seen many things and places, and had stowed them all away in a shrewd intellect and a vigorous memory.  He was an American born, was Captain Jorgan,—a New-Englander,—but he was a citizen of the world, and a combination of most of the best qualities of most of its best countries....