A Masque of Days From the Last Essays of Elia: Newly Dressed & Decorated 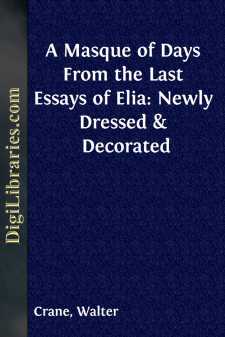 THE OLD YEAR being dead, and the NEW YEAR coming of age, wh: he does by Calendar Law, as soon as the breath is out of the old gentleman’s body, nothing would serve the young spark but he must give a dinner upon the occasion, to wh: all the Days in the year were invited. The Festivals, whom he deputed as his stewards, were mightily taken with the notion. They

had been engaged time out of mind, they said, in providing mirth and good cheer for mortals below; and it was time they should have a taste of their own bounty. It was stiffly debated among them whether the Fasts should be admitted. Some said, that the appearance of such lean, starved guests, with their mortified faces, would pervert the ends of the meeting. But the objection was overruled by Christmas Day who had a design upon Ash Wednesday

(as you shall hear), and a mighty desire to see how the old Domine would behave himself in his cups.

All the Days came to their day. Covers were provided for three hundred and sixty-five guests at the principal table; with an occasional knife and fork at the side-board for the Twenty-Ninth of February.

I should have told you that cards of invitation had been issued. The carriers were THE HOURS twelve little, merry whirligig foot-pages as you should desire to see, that went all round, and found

out the persons invited well enough, with the exception of Easter Day, Shrove Tuesday, and a few such Moveables, who had lately shifted their quarters.

Well, they all met at last, foul Days, fine Days, all sorts of Days, and a rare din they made of it. There was nothing but, Hail! fellow Day,—well met—brother Day—sister Day—only LADY DAY kept a little aloof and seemed some

what scornful. Yet some said, TWELFTH DAY cut her out and out, for she came in a tiffany suit, white and gold, like a queen on a frost-cake, all royal glittering, and Epiphanous.

The rest came, some in green, some in white—but old Lent and his family were not yet out of mourning.

Rainy Days came in, dripping; and sun-shiny Days helped them to change their stockings.

Wedding Day was there in his marriage finery, a little the worse for wear.

Pay Day came late, as he always does; and Doomsday sent word—he might be expected.

April Fool (as my young lord’s jester) took upon himself to marshal the guests, and wild work he made with it. It would have posed old Erra Pater to have found out any given Day in the year, to erect a scheme upon

good Days, bad Days were so shuffled together, to the confounding of all sober horoscopy. He had stuck the Twenty-First of June next to the Twenty-Second of December, and the former looked like a Maypole siding a marrow-bone.

Ash Wednesday got wedged in (as was concerted) betwixt Christmas & Lord Mayor’s Days. Lord! how he laid about him! Nothing but barons of beef & turkeys would go down with him to the great greasing & detriment of his new sackcloth bib and tucker. And still Christmas Day was at his elbow, plying him with the wassail-bowl,

till he roared, & hiccupp’d, & protested there was no faith in dried ling, a sour, windy, acrimonious, censorious hy-po-crit-crit-critical mess & no dish for a gentleman. Then he dipt his fist into the middle of the great custard that stood before his left-hand neighbour, & daubed his hungry beard all over with it, till you would have taken him for the Last Day in December it so hung in icicles.