A Little Princess; being the whole story of Sara Crewe now told for the first time 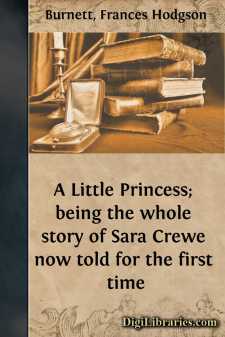 Add to My Favorites
Published: 9 years ago
Downloads: 257
Rating: (0 Votes)

Once on a dark winter's day, when the yellow fog hung so thick and heavy in the streets of London that the lamps were lighted and the shop windows blazed with gas as they do at night, an odd-looking little girl sat in a cab with her father and was driven rather slowly through the big thoroughfares.

She sat with her feet tucked under her, and leaned against her father, who held her in his arm, as she stared out of the window at the passing people with a queer old-fashioned thoughtfulness in her big eyes.

She was such a little girl that one did not expect to see such a look on her small face. It would have been an old look for a child of twelve, and Sara Crewe was only seven. The fact was, however, that she was always dreaming and thinking odd things and could not herself remember any time when she had not been thinking things about grown-up people and the world they belonged to. She felt as if she had lived a long, long time.

At this moment she was remembering the voyage she had just made from Bombay with her father, Captain Crewe. She was thinking of the big ship, of the Lascars passing silently to and fro on it, of the children playing about on the hot deck, and of some young officers' wives who used to try to make her talk to them and laugh at the things she said.

Principally, she was thinking of what a queer thing it was that at one time one was in India in the blazing sun, and then in the middle of the ocean, and then driving in a strange vehicle through strange streets where the day was as dark as the night. She found this so puzzling that she moved closer to her father.

"Papa," she said in a low, mysterious little voice which was almost a whisper, "papa."

"What is it, darling?" Captain Crewe answered, holding her closer and looking down into her face. "What is Sara thinking of?"

"Is this the place?" Sara whispered, cuddling still closer to him. "Is it, papa?"

"Yes, little Sara, it is. We have reached it at last." And though she was only seven years old, she knew that he felt sad when he said it.

It seemed to her many years since he had begun to prepare her mind for "the place," as she always called it. Her mother had died when she was born, so she had never known or missed her. Her young, handsome, rich, petting father seemed to be the only relation she had in the world. They had always played together and been fond of each other. She only knew he was rich because she had heard people say so when they thought she was not listening, and she had also heard them say that when she grew up she would be rich, too. She did not know all that being rich meant. She had always lived in a beautiful bungalow, and had been used to seeing many servants who made salaams to her and called her "Missee Sahib," and gave her her own way in everything. She had had toys and pets and an ayah who worshipped her, and she had gradually learned that people who were rich had these things. That, however, was all she knew about it.

During her short life only one thing had troubled her, and that thing was "the place" she was to be taken to some day....