A Little Mother to the Others 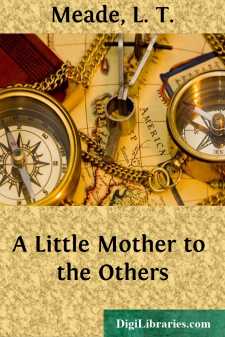 CHAPTER I. THE POOR INNOCENT.

The four children had rather peculiar names. The eldest girl was called Iris, which, as everybody ought to know, means rainbow—indeed, there was an Iris spoken of in the old Greek legends, who was supposed to be Hera's chief messenger, and whenever a rainbow appeared in the sky it was said that Iris was bringing down a message from Hera. The Iris of this story was a very pretty, thoughtful little girl, aged ten years. Her mother often talked to her about her name, and told her the story which was associated with it. The eldest boy was called Apollo, which also is a Greek name, and was supposed at one time to belong to the most beautiful boy in the world. The next girl was called Diana, and the youngest boy's name was Orion.

When this story opens, Iris was ten years old, Apollo nine, Diana six, and little Orion five. They were like ordinary children in appearance, being neither particularly handsome nor particularly the reverse; but in their minds and ways, in their habits and tastes, they seemed to have inherited a savor of those far-off beings after whom their mother had called them. They were, in short, very unworldly children—that does not mean that they were specially religious—but they did not care for fine clothes, nor the ordinary amusements which ordinary children delight in. They loved flowers with a love which was almost a passion, and they also knew a great deal about the stars, and often coaxed their mother to allow them to sit up late at night to watch the different constellations; but above all these things they adored, with a great adoration, the entire animal kingdom.

It so happened that the little Delaneys spent the greater part of their time in a beautiful garden. I don't think, in all the course of my wanderings, I ever saw a garden quite to compare to that in which their early days were spent. Even in the winter they lived the greater part of their time here, being hardy children and never catching cold. The house was a fine and beautiful building, having belonged to their family for several generations, but the children thought nothing at all of that in comparison with the garden. Here, when possible, they even had their lessons; here they played all their wonderful and remarkable games; here they went through their brief sorrows, and tasted their sweetest joys. But I must hasten to describe the garden itself. In the first place, it was old-fashioned, having very high brick walls covered all over with fruit trees. These fruit trees had grown slowly, and were now in the perfection of their prime. Never were such peaches to be seen, nor such apricots, nor such cherries, as ripened slowly on the red brick walls of the old garden. Inside the walls almost all well-known English flowers flourished in lavish profusion. There was also fruit to be found here in quantities. Never were such strawberries to be seen as could be gathered from those great strawberry beds. Then the gooseberries with which the old bushes were laden; the currants, red, black, and white; the raspberries, had surely their match nowhere else on this earth.

The walled-in garden contained quite five acres of ground, and was divided itself into three portions. In the middle was the flower garden proper. Here there was a long, straight walk which led to an arbor at the bottom. The children were particularly fond of this arbor, for their father had made it for them with his own hands, and their mother had watched its growth. Mrs. Delaney was very delicate at the time, and as she looked on and saw the pretty arbor growing into shape, she used to lean on Iris' arm and talk to her now and then in her soft, low voice about the flowers and the animals, and the happy life which the little people were leading. At these moments a look would often come into her mother's gentle eyes which caused Iris' heart to beat fast, and made her tighten her clasp on the slender arm. Then, when the arbor was quite finished, Mr. Delaney put little seats into it, a rustic chair for each child, which he or she could take in or out at pleasure. The chairs were carved in commemoration of each child's name....