A Little Maid of Ticonderoga 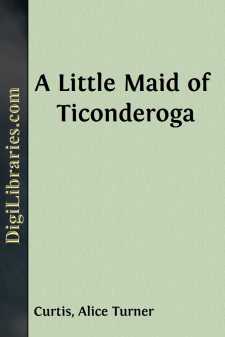 Faith Carew was ten years old when Esther Eldridge came to visit her. Faith lived in a big comfortable log cabin on one of the sloping hillsides of the Green Mountains. Below the cabin was her father’s mill; and to Faith it always seemed as if the mill-stream had a gay little song of its own. She always listened for it when she awoke each morning.

“I wonder if Esther will hear what the brook sings?” thought Faith as she drew on her moccasin slippers and dressed as quickly as she could, for her mother had already called her twice, and Faith had just reached the top of the stairs when the third call of, “Faith! Faith! I shall not keep your porridge hot another instant,” sounded from the kitchen.

“I’m coming, mother dear,” the little girl called back, and hurried down the stairs, wondering to herself why grown people who could always do exactly as they pleased should think it best to rise before the sun was really up.

“Your father was off to the mill an hour ago,” said Mrs. Carew, setting a bowl of steaming porridge on the end of the table beside a narrow window, “so you will have to eat your porridge alone.”

Faith sat down at the table, looking out through the open window toward the mill.

“I do hope Esther Eldridge and her father will come to-day,” she said. “Do you think they will, mother dear?”

“Yes, child; they will probably arrive before sunset. Your father expected them yesterday. It will be a fine thing for you to have a little girl for a companion. But she is a village child, and may not be happy in the Wilderness,” responded Mrs. Carew.

“Why, of course she will like being here! Just think, she has never seen wheat ground into flour! And she can see that in our mill; and she has always walked on real roads, and here she will not even see a road; and I know many pleasant paths where we can walk, and I can tell her the names of different trees and flowers. I’m sure she will think the Wilderness a fine place,” said Faith, nodding her head so that her yellow curls seemed to dance about her face.

“I hope they make the journey from Brandon safely. Your father has been told that the Indians have been troublesome to the settlers near Lake Dunmore; and besides that, there are many bears coming out into the clearings these fine autumn days. But Mr. Eldridge is a good shot, and I am seeking trouble in naming Indians or bears. Finish your breakfast, Faithie, and run to the garden and bring me in the ripest of the pumpkins; for I must make some cakes for our company.”

The Carews lived in a log house on a slope of cleared ground running down to the mill-stream. There were no roads, only rough trails, and they had no near neighbors. Faith’s father had a large grant of land, a “New Hampshire Grant,” it was called, which ran toward the eastern shore of Lake Champlain. Faith had no playmates, and when Mr. Eldridge, of the town of Brandon, had sent word that he was coming to see Mr. Carew on business and would bring his small daughter with him, Faith had been overjoyed and had made many plans of what she would do to entertain her visitor....