A Little Maid of Old Philadelphia 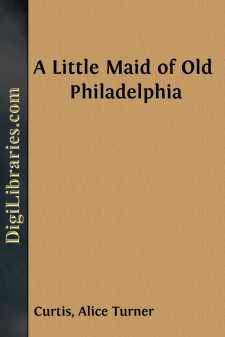 "Where do you suppose Hero can be, Aunt Deborah? He isn't anywhere about the house, or in the shed or the garden," and Ruth Pennell's voice sounded as if she could hardly keep back the tears as she stood in the doorway of the pleasant kitchen where Aunt Deborah was at work.

"Do you suppose the British have taken him?" she asked a little fearfully; for it was the spring of 1778, when the British troops were in Philadelphia, and Ruth was quite sure that every English soldier who saw Hero must want him for his own. The dog was her dearest possession. On her tenth birthday, nearly a year before, her father had given her Hero for a birthday present; and now that her father was with Washington's army his gift seemed even more precious to his little daughter.

Aunt Deborah looked at Ruth for a moment before she answered, and Ruth became conscious that her brown hair was rough and untidy from running about the garden in the March wind, that her hands were not clean, and that there was an ugly rent in her blue checked apron where it had caught on a nail in the shed.

"Was it not yesterday that thee declared Hero was stolen, only to find that he had followed Winifred Merrill home? And on Sunday, thee was sure he had been killed, because he did not appear the first time thee called," responded Aunt Deborah reprovingly. Aunt Deborah was not very large, and her smooth round face under the neat cap, such as Quaker women wear, was usually smiling and friendly; but it always seemed to Ruth that no least bit of dirt or untidiness ever escaped those gray eyes.

"Do you suppose he is at Winifred's? I wish she wouldn't let him follow her," and Ruth's tone was troubled. Of course Winifred was her dearest friend, but Ruth was not willing that Hero should divide his loyalty.

"Very likely," responded Aunt Deborah, "but thee must smooth thy hair, wash thy hands and change thy apron before thee goes to inquire; and put on thy hat. It is not seemly for a girl to run about the street bareheaded."

"Oh, Aunt Deborah! Only to go next door!" pleaded Ruth, but Aunt Deborah only nodded; so Ruth went to her own room and in a few minutes was back tying the broad brown ribbons of her hat under her chin as she ran through the kitchen.

"I do hope Mother will come home soon," the little girl thought as she went down the front steps to the street; "Aunt Deborah is so fussy."

Mrs. Pennell had been away for a week caring for her sister who lived in Germantown, near Philadelphia, and who was ill; and Aunt Deborah Mary Farleigh had come in from her home at Barren Hill, twelve miles distant, to stay with Ruth during Mrs. Pennell's absence.

As Ruth ran up the steps of her friend's house the front door opened, and Winifred appeared.

"Oh, Ruthie! Where are you going?" she asked smilingly.

Winifred was just a month older than Ruth, and they were very nearly the same size. They both had blue eyes; but Ruth's hair was of a darker brown than Winifred's. They had both attended the same school until Lord Cornwallis with his troops entered Philadelphia; since that time each little girl had been taught at home....