A Little Maid of Old Maine 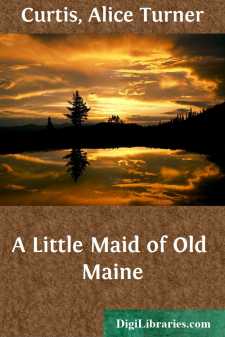 CHAPTER I A LIBERTY POLE

Anna and Rebecca Weston, carrying a big basket between them, ran along the path that led from their home to the Machias River. It was a pleasant May morning in 1775, and the air was filled with the fragrance of the freshly cut pine logs that had been poled down the river in big rafts to be cut into planks and boards at the big sawmills. The river, unusually full with the spring rains, dashed against its banks as if inviting the little girls to play a game with it. Usually Anna and Rebecca were quite ready to linger at the small coves which crept in so near to the footpath, and sail boats made of pieces of birch-bark, with alder twigs for masts and broad oak leaves for sails. They named these boats Polly and Unity, after the two fine sloops which carried lumber from Machias to Boston and returned with cargoes of provisions for the little settlement.

But this morning the girls hurried along without a thought for such pleasant games. They were both anxious to get to the lumber yard as soon as possible, not only to fill their basket with chips, as their mother had bidden them, but to hear if there were not some news of the Polly, the return of which was anxiously awaited; for provisions were getting scarce in this remote village, and not until the Polly should come sailing into harbor could there be any sugar cakes, or even bread made of wheat flour.

As they hurried along they heard the cheerful whistle of Mr. Worden Foster, the blacksmith, who was just then taking a moment of well-earned leisure in the door of his shop, and stood looking out across the quiet waters of the river and harbor. As the girls came near he nodded pleasantly, but did not stop whistling. People in Machias declared that the blacksmith woke up in the morning whistling, and never stopped except to eat. And, indeed, his little daughter Luretta said that when her father wanted a second helping of anything at the table he would whistle and point toward it with his knife; so it might be said that Mr. Foster whistled even at his meals.

“There’s Father! There’s Father!” Anna called out as they passed a big pile of pine logs and came to where stacks of smooth boards just from the sawmill shut the river from sight.

“Well, Danna, do you and Rebby want your basket filled with golden oranges from sunny Italy and dates from Egypt? Or shall it be with Brazilian nuts and ripe pineapples from South America?”

“Oh, Father! Say some more!” exclaimed Anna, laughing with delight; for she never tired of hearing her father tell of the wonderful fruits of far-off lands that he had seen in his sailor days, before he came to live in the little settlement of Machias, in the Province of Maine, and manage the big sawmill.

“Father, tell us, is the Polly coming up the bay?” Rebecca asked eagerly. She had a particular reason for wanting the sloop to reach harbor as soon as possible, for her birthday was close at hand, and her father had told her that the Polly was bringing her a fine gift; but what it was Rebecca could not imagine....