A Little Maid of Massachusetts Colony 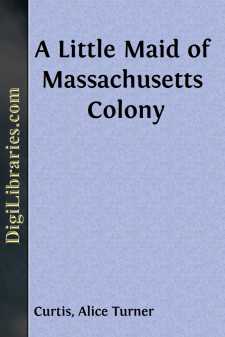 “Do you think I might go, Aunt Martha?” There was a pleading note in the little girl’s voice as she stood close by Mrs. Stoddard’s chair and watched her folding the thin blue paper on which Rose Freeman’s letter was written.

“It is a pleasant invitation, surely,” replied Mrs. Stoddard, “but the Freemans have ever been good friends to us; and so Rose is to visit their kin in Brewster and then journey back to Boston with her father in his chaise, and she says there will be plenty of room for you. Well! Well! ’Tis a wonderful journey.”

Anne moved uneasily. “But, Aunt Martha, do you forget that she asks if Uncle Enos cannot bring me to Brewster?”

“Yes, child, I have read the letter, and I doubt not Enos will set you safe across to Brewster. And your father’s vessel will be due in Boston early in September, and he could bring you safely home to Province Town. We’ll see what Uncle Enos says about sailing across to Brewster,” and Mrs. Stoddard smiled affectionately at Anne’s delighted exclamation. It was two years before that Anne Nelson, whose father’s boat had been seized by an English ship, had come to live with the Stoddards. Her father had escaped, and, after serving the colonies until after the battle of Lexington, had returned to Province Town, and was now away on a fishing cruise. Anne had visited the Freemans the year before, and now this pleasant invitation for a journey to Boston had been brought by one of the harbor fishermen, the only way letters came to Province Town. It was no wonder Anne was eager for permission to go. It would be a three days’ ride from Brewster, and the road would take her through many pleasant towns and villages. There was not a person in the settlement who had taken the journey by land. Uncle Enos declared that Province Town folk who could sail a good boat, with fair winds, to Boston in six hours were too wise to take such a roundabout route as the land offered.

“But it will be a fine ride for Anne,” he agreed. “She will learn much by the journey, and Squire Freeman will take good care of her. I’ll set her across to Brewster on Tuesday, as Rose says they plan to start early on Wednesday morning. Well, Anne,” and he turned toward the happy child, “what do you think the Cary children will say when you tell them that you are to ride to Boston in a fine chaise?”

“I do not know, but I think Amos will say that he would not journey by land; he is all for big ships; but I’m sure Amanda will think it is a wonderful thing, and wish to go with me, and indeed I wish she might. But why do we not have chaises in Province Town?”

“We must have roads first,” replied Aunt Martha smilingly; “but Province Town has no need of coaches and roads with good boats in harbor. Now we must see that your clothes are in order, for a week soon goes.”

“Anne! Anne!” and before Anne could respond a girl of about her own age came running into the kitchen. “Can you go with me over to the outer beach? May she go, Mrs. Stoddard? See! I have enough luncheon for us both in this basket,” and Amanda held up a pretty basket woven of sweet grass.

“May I, Aunt Martha? And oh, Amanda! A wonderful thing is going to happen to me. Isn’t it wonderful, Uncle Enos?”

Aunt Martha and Uncle Enos both smiled and nodded, and Amanda looked from one to the other in great surprise.

“Run along with Amanda and tell her all about it,” said Mrs. Stoddard, and the two little girls started happily off.

“I can guess,” declared Amanda, “for I know that Captain Starkweather brought you a letter from Boston, and I can guess who the letter is from.”