A Little Girl in Old Boston 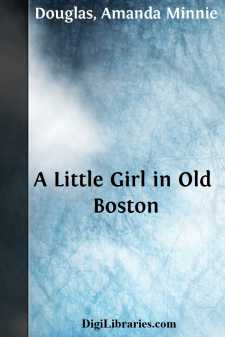 "I do suppose she is a Papist! The French generally are," said Aunt Priscilla, drawing her brows in a delicate sort of frown, and sipping her tea with a spoon that had the London crown mark, and had been buried early in revolutionary times.

"Why, there were all the Huguenots who emigrated from France for the sake of worshiping God in their own way rather than that of the Pope. We Puritans did not take all the free-will," declared Betty spiritedly.

"You are too flippant, Betty," returned Aunt Priscilla severely. "And I doubt if her father's people had much experimental religion. Then, she has been living in a very hot-bed of superstition!"

"The cold, dreary Lincolnshire coast! I think it would take a good deal of zeal to warm me, even if it was superstition."

"And she was in a convent after her mother died! Yes, she is pretty sure to be a Papist. It seems rather queer that second-cousin Charles should have remembered her in his will."

"But Charles was his namesake and nephew, the child of his favorite sister," interposed Mrs. Leverett, glancing deprecatingly at Betty, pleading with the most beseeching eyes that she should not ruffle Aunt Priscilla up the wrong way.

"But what is that old ma'shland good for, anyway?" asked Aunt Priscilla.

"Why they are filling in and building docks," said Betty the irrepressible. "Father thinks by the time she is grown it will be a handsome fortune."

Aunt Priscilla gave a queer sound that was not a sniff, but had a downward tendency, as if it was formed of inharmonious consonants. It expressed both doubt and disapproval.

"But think of the expense and the taxes! You can't put a bit of improvement on anything but the taxes eat it up. I want my hall door painted, and the cornishes,"—Aunt Priscilla always would pronounce it that way,—"but I mean to wait until the assessor has been round. It's the best time to paint in cool weather, too. I can't afford to pay a man for painting and then pay the city for the privilege."

No one controverted Mrs. Perkins. She broke off her bread in bits and sipped her tea.

"Why didn't they give her some kind of a Christian name?" she began suddenly. "Don't you suppose it is French for the plain, old-fashioned, sensible name of Dorothy?"

"Phyllis and Chloe are regular nigger names," with the utmost disdain.

"But Greek, all the same. Ask Uncle Winthrop."

"Well, I shall call her Dorothy. I'm neither Greek nor Latin nor a college professor. There's no law against my being sensible, fursisee"—which really meant "far as I see." "And the idea of appointing Winthrop Adams her guardian! I did think second-cousin Charles had more sense. Winthrop thinks of nothing but books and going back to the Creation of the World, just as if the Lord couldn't have made things straight in the beginning without his help. I dare say he will find out what language they talked before the dispersion of Babel. People are growing so wise nowadays, turning the Bible inside out!" and she gave her characteristic sniff....