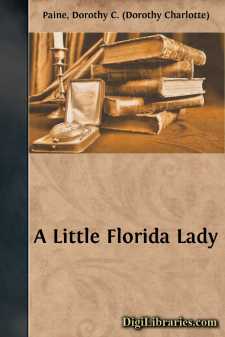 CHAPTER I The Journey to Florida.

New York was in the throes of a blizzard. The wind howled and shrieked, heralding the approach of March, the Wind King's month of the year. Mrs. Davenport stood at a second story window of a room of the Gilsey House, and looked down idly on the bleak thoroughfare. She was a young-looking woman for her thirty-five years, and had an extremely sweet face, denoting kindliness of heart.

The hall door opened, and Elizabeth Davenport entered, carrying in her arms a little ball of fluffy gray.

Elizabeth, or Beth, as she was more commonly called at the age of seven, might have been compared to a good fairy had she not been so plump. She almost always radiated sunshine, and her face was generally lighted with a smile, the outcome of a warm heart. Sometimes clouds slightly dimmed the sunshine, but they always proved to be summer clouds that quickly passed. Her face was now flushed, and her eyes sparkled.

Mrs. Davenport turned, and smiled in greeting, but, at the same time, brushed a tear from her eye.

Mrs. Davenport's eyes filled, but she bravely smiled. "I'm a little unhappy over leaving all our friends, Beth. Florida seems very far away."

"I wouldn't be unhappy."

"How would you help it, dearie?"

"Why mamma," she answered triumphantly after a second's thought, "there are so many pleasant things to think about that I just never think of the unpleasant ones," and her face broke into a smile, so cheery that Mrs. Davenport's heart lightened.

"Mamma," she continued, "it's very easy for me to be happy. Every one is so good to me. The chambermaid just gave me this dear, dear kitty. Isn't it too cute for anything? I mean to take it to Florida with me."

Beth was about to demur, when a door into an adjoining room opened, and Mr. Davenport called:

Mrs. Davenport hastened to answer the call. She was hardly out of the room before Beth rushed to an open trunk. Impatiently, she began pulling things out. She burrowed almost to the very bottom. Lastly, she took out a skirt of her mother's, and wrapped something very carefully in it.

The door into the adjoining room creaked. Beth blushed scarlet, and dropped the bundle into the trunk. Then as no one came, she threw the other articles pell-mell on top of the bundle, and scampered guiltily to the other end of the room. Not an instant too soon to escape immediate detection, for Mrs. Davenport reëntered the room, followed by a girl of thirteen. This was Marian, Beth's sister. The two girls were totally unlike both in looks and in disposition. Marian was a tall blonde, and slight for her age. She had quiet, gentle ways.

"Mother, here's my red dress on the floor," she said, picking it up near the trunk.

"Beth, what have you been doing?"

Beth kept her blushing, telltale face turned from her mother, and did not answer. Without another word, Mrs. Davenport went to the trunk, and began smoothing things out....