A Little Cook Book for a Little Girl 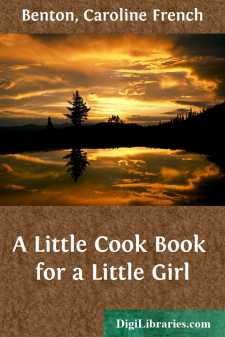 Once upon a time there was a little girl named Margaret, and she wanted to cook, so she went into the kitchen and tried and tried, but she could not understand the cook-books, and she made dreadful messes, and spoiled her frocks and burned her fingers till she just had to cry.

One day she went to her grandmother and her mother and her Pretty Aunt and her Other Aunt, who were all sitting sewing, and asked them to tell here about cooking.

``What is a roux,'' she said, ``and what's a mousse and what's an entrée? What are timbales and sautés and ingredients, and how do you mix 'em and how long do you bake 'em? Won't somebody please tell me all about it?''

And her Pretty Aunt said, ``See the flour all over that new frock!'' and her mother said, ``Dear child, you are not old enough to cooks yet;'' and her grandmother said, ``Just wait a year or two, and I'll teach you myself;'' and the Other Aunt said, ``Some day you shall go to cooking-school and learn everything; you know little girls can't cook.''

So she kept on trying to learn, but she burned her fingers and spoiled her dresses worse than ever, and her messes were so bad they had to be thrown out, every one of them; and she cried and cried. And then one day her grandmother said, ``It's a shame that child should not learn to cook if she really wants to so much;'' and her mother said ``Yes, it is a shame, and she shall learn! Let's get her a small table and some tins and aprons, and make a little cook-book all her own out of the old ones we wrote for ourselves long ago,—just the plain, easy things anybody can make.'' And both her aunts said, ``Do! We will help, and perhaps we might put in just a few cooking-school things beside.''

It was not long after this that Margaret had a birthday, and she was taken to the kitchen to get her presents, which she thought the funniest thing in the world. There they all were, in the middle of the room: first her father's present, a little table with a white oilcloth cover and casters, which would push right under the big table when it was not being used. Over a chair her grandmother's present, three nice gingham aprons, with sleeves and ruffled bibs. On the little table the presents of the aunties, shiny new tins and saucepans, and cups to measure with, and spoons, and a toasting-fork, and ever so many things; and then on one corner of the table, all by itself, was her mother's present, her own little cook-book, with her own name on it, and that was best of all.

When Margaret had looked at everything, she set out in a row the big bowl and the middle-sized bowl and the little wee bowl, and put the scalloped patty-pans around them, and the real egg-beater in front of all, just like a picture, and then she read a page in her cook-book, and began to believe it was all true. So she danced for joy, and put on a gingham apron and began to cook that very minute, and before another birthday she had cooked every single thing in the book....