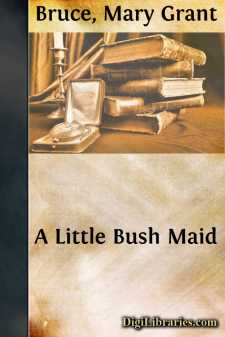 Norah's home was on a big station in the north of Victoria—so large that you could almost, in her own phrase, "ride all day and never see any one you didn't want to see"; which was a great advantage in Norah's eyes. Not that Billabong Station ever seemed to the little girl a place that you needed to praise in any way. It occupied so very modest a position as the loveliest part of the world!

The homestead was built on a gentle rise that sloped gradually away on every side; in front to the wide plain, dotted with huge gum trees and great grey box groves, and at the back, after you had passed through the well-kept vegetable garden and orchard, to a long lagoon, bordered with trees and fringed with tall bulrushes and waving reeds.

The house itself was old and quaint and rambling, part of the old wattle and dab walls yet remaining in some of the outhouses, as well as the grey shingle roof. There was a more modern part, for the house had been added to from time to time by different owners, though no additions had been made since Norah's father brought home his young wife, fifteen years before this story opens. Then he had built a large new wing with wide and lofty rooms, and round all had put a very broad, tiled verandah. The creepers had had time to twine round the massive posts in those fifteen years, and some even lay in great masses on the verandah roof; tecoma, pink and salmon-coloured; purple bougainvillea, and the snowy mandevillea clusters. Hard-headed people said this was not good for the building—but Norah's mother had planted them, and because she had loved them they were never touched.

There was a huge front garden, not at all a proper kind of garden, but a great stretch of smooth buffalo grass, dotted with all kinds of trees, amongst which flower beds cropped up in most unexpected and unlikely places, just as if some giant had flung them out on the grass like a handful of pebbles that scattered as they flew. They were always trim and tidy, and the gardener, Hogg, was terribly strict, and woe betide the author of any small footmarks that he found on one of the freshly raked surfaces. Nothing annoyed him more than the odd bulbs that used to come up in the midst of his precious buffalo grass; impertinent crocuses and daffodils and hyacinths, that certainly had no right there. "Blest if I know how they ever gets there!" Hogg would say, scratching his head. Whereat Norah was wont to retire behind a pyramid tree for purposes of mirth.

Hogg's sworn foe was Lee Wing, the Chinese gardener, who reigned supreme in the orchard and the kingdom of vegetables—not quite the same thing as the vegetable kingdom, by the way! Lee Wing was very fat, his broad, yellow face generally wearing a cheerful grin—unless he happened to catch sight of Hogg. His long pigtail was always concealed under his flapping straw hat. Once Jim, who was Norah's big brother, had found him asleep in his hut with the pigtail drooping over the edge of the bunk. Jim thought the opportunity too good to lose and, with such deftness that the Celestial never stirred, he tied the end of the pigtail to the back of a chair—with rather startling results when Lee Wing awoke with a sudden sense of being late, and made a spring from the bunk....