A Little Book of Filipino Riddles 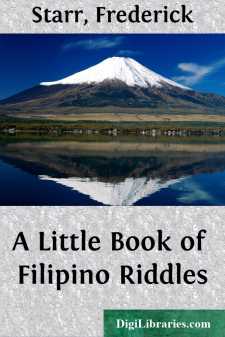 Although I had already inquired for them from Ilocano boys, my first actual knowledge of Filipino riddles was due to Mr. George T. Shoens, American teacher among the Bisayans. He had made a collection of some fifty Bisayan riddles and presented a brief paper regarding them at the Anthropological Conference held at Baguio, under my direction, on May 12–14, 1908. My own collection was begun among Ilocano of Union Province from whom about two hundred examples were secured. Others were later secured from Pangasinan, Gaddang, Pampangan, Bisayan and Tagal sources. My informants have chiefly been school-boys, who spoke a little English; they wrote the text of riddle and answer in their native tongue and then we went over them carefully together to make an English translation and to get at the meaning. Many Filipinos know how to read and write their native language, although few have had actual instruction in doing so. There is no question that errors and inconsistencies Page 5exist in the spelling of these riddles, due to this lack of instruction and to the fact that the texts have been written by many different persons. I am myself not acquainted with any Malay language. I have tried to secure uniformity in spelling within the limits of each language but have no doubt overlooked many inconsistencies. The indulgence of competent critics is asked. It has been our intention throughout to adhere to the old orthography. Thus the initial qu and the final ao have been preferred.

The word for riddle varies with the population. In Ilocano it is burburtia, in Pangasinan boniqueo, in Tagal bugtong, in Gaddang ———, in Pampangan bugtong, in Bisayan tugmahanon.

Riddles are common to all mankind. They delighted the old Aryans and the ancient Greeks as they do the modern Hindu and the Bantu peoples of darkest Africa. Many writers have defined the riddle. Friedreich in his Geschichte des Räthsels, says: “The riddle is an indirect presentation of an unknown object, in order that the ingenuity of the hearer or reader may be exercised in finding it out.... Wolf has given the following definition: the riddle is a play of wit, which endeavors to so present Page 6an object, by stating its characteristic features and peculiarities, as to adequately call it before the mind, without, however, actually naming it.”

The riddles of various Oriental peoples have already been collected and more or less adequately discussed by authors. Hebrew riddles occur in the Bible, the best known certainly being Samson's: