A Little Book of Christmas 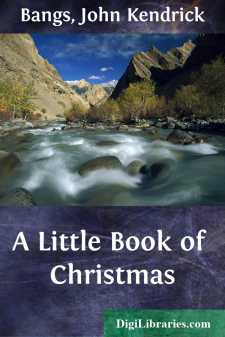 A TOAST TO SANTA CLAUS Whene'er I find a man who don'tBelieve in Santa Claus,And spite of all remonstrance won'tYield up to logic's laws,And see in things that lie aboutThe proof by no means dim,I straightway cut that fellow out,And don't believe in him. The good old Saint is everywhereAlong life's busy way.We find him in the very airWe breathe day after day—Where courtesy and kindlinessAnd love are joined together,To give to sorrow and distressA touch of sunny weather. We find him in the maiden's eyesBeneath the mistletoe,A-sparkling as the star-lit skiesAll golden in their glow.We find him in the pressure ofThe hand of sympathy,And where there's any thought of loveHe's mighty sure to be. So here's to good old Kindliheart!The best bet of them all,Who never fails to do his partIn life's high festival;The worthy bearer of the crownWith which we top the Saint.A bumper to his health, and downWith them that say he ain't! THE CONVERSION OF HETHERINGTON I

HETHERINGTON wasn't half a bad sort of a fellow, but he had his peculiarities, most of which were the natural defects of a lack of imagination. He didn't believe in ghosts, or Santa Claus, or any of the thousands of other things that he hadn't seen with his own eyes, and as he walked home that rather chilly afternoon just before Christmas and found nearly every corner of the highway decorated with bogus Saints, wearing the shoddy regalia of Kris-Kringle, the sight made him a trifle irritable. He had had a fairly good luncheon that day, one indeed that ought to have mellowed his disposition materially, but which somehow or other had not so resulted. In fact, Hetherington was in a state of raspy petulance that boded ill for his digestion, and when he had reached the corner of Forty-second Street and Fifth Avenue, the constant iteration and reiteration of these shivering figures of the god of the Yule had got on his nerves to such an extent as to make him aggressively quarrelsome. He had controlled the asperities of his soul tolerably well on the way uptown, but the remark of a small child on the highway, made to a hurrying mother, as they passed a stalwart-looking replica of the idol of his Christmas dreams, banging away on a tambourine to attract attention to the iron pot before him, placed there to catch the pennies of the charitably inclined wayfarer—"Oh, mar, there's Sandy Claus now!"—was too much for him.

"Tush! Nonsense!" ejaculated Hetherington, glowering at the shivering figure in the turkey-red robe. "The idea of filling children's minds up with such balderdash! Santa Claus, indeed! There isn't a genuine Santa Claus in the whole bogus bunch."

The Saint on the corner banged his tambourine just under Hetherington's ear with just enough force to jar loose the accumulated irascibility of the well-fed gentleman.

"This is a fine job for an able-bodied man like you!" said Hetherington with a sneer. "Why don't you go to work instead of helping to perpetuate this annual fake?"

The Saint looked at him for a moment before replying.

"Yes. I'm speaking to you," said Hetherington. "Here's the whole country perishing for the lack of labor, and in spite of that fact this town has broken out into a veritable rash of fake Santa Clauses—"

"That'll do for you!" retorted Santa Claus. "It's easy enough for a feller with a stomach full o' victuals and plenty of warm clothes on his back to jump on a hard-workin' feller like me—"

"Hard-working?" echoed Hetherington. "I like that! You don't call loafing on a street corner this way all day long hard work, do you?"

He rather liked the man's spirit, despite his objection to his occupation....