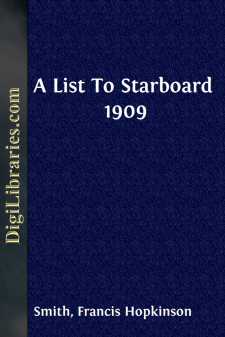 A short, square chunk of a man walked into a shipping office on the East Side, and inquired for the Manager of the Line. He had kindly blue eyes, a stub nose, and a mouth that shut to like a rat-trap, and stayed shut. Under his chin hung a pair of half-moon whiskers which framed his weather-beaten face as a spike collar frames a dog's.

"You don't want to send this vessel to sea again," blurted out the chunk. "She ought to go to the dry-dock. Her boats haven't had a brushful of paint for a year; her boilers are caked clear to her top flues, and her pumps won't take care of her bilge water. Charter something else and lay her up."

The Manager turned in his revolving chair and faced him. He was the opposite of the Captain in weight, length, and thickness—a slim, well-groomed, puffy-cheeked man of sixty with a pair of uncertain, badly aimed eyes and a voice like the purr of a cat.

"Oh, my dear Captain, you surely don't mean what you say. She is perfectly seaworthy and sound. Just look at her inspection—" and he passed him the certificate.

"No—I don't want to see it! I know 'em by heart: it's a lie, whatever it says. Give an inspector twenty dollars and he's stone blind."

The Manager laughed softly. He had handled too many rebellious captains in his time; they all had a protest of some kind—it was either the crew, or the grub, or the coal, or the way she was stowed. Then he added softly, more as a joke than anything else:

"Not afraid, are you, Captain?"

A crack started from the left-hand corner of the Captain's mouth, crossed a fissure in his face, stopped within half an inch of his stub nose, and died out in a smile of derision.

"What I'm afraid of is neither here nor there. There's cattle aboard—that is, there will be by to-morrow night; and there's a lot of passengers booked, some of 'em women and children. It isn't honest to ship 'em and you know it! As to her boilers send for the Chief Engineer. He'll tell you. You call it taking risks; I call it murder!"

"And so I understand you refuse to obey the orders of the Board?—and yet she's got to sail on the 16th if she sinks outside."

"When I refuse to obey the orders of the Board I'll tell the Board, not you. And when I do tell 'em I'll tell 'em something else, and that is, that this chartering of worn-out tramps, painting 'em up and putting 'em into the Line, has got to stop, or there'll be trouble."

"But this will be her last trip, Captain. Then we'll overhaul her."

"I've heard that lie for a year. She'll run as long as they can insure her and her cargo. As for the women and children, I suppose they don't count—" and he turned on his heel and left the office.

On the way out he met the Chief Engineer.

On the fourth day out this conversation took place in the smoking-room between a group of passengers.

"Regular tub, this ship!" growled the Man-Who-Knew-It-All to the Bum Actor. "Screw out of the water every souse she makes; lot of dirty sailors skating over the decks instead of keeping below where they belong; Chief Engineer loafing in the Captain's room every chance he gets—there he goes now—and it's the second time since breakfast. And the Captain is no better! And just look at the accommodations—three stewards and a woman! What's that to look after thirty-five passengers?...