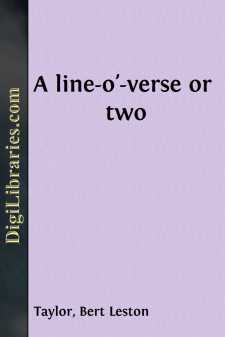 THE LAY OF ST. AMBROSE

“And hard by doth dwell, in St. Catherine’s cell,Ambrose, the anchorite old and grey.”—The Lay of St. Nicholas.

Ambrose the anchorite old and greyLarruped himself in his lonely cell,And many a welt on his pious peltThe scourge evoked as it rose and fell.

For hours together the flagellant leatherWent whacketty-whack with his groans of pain;And the lay-brothers said, with a wag of the head,“Ambrose has been at the bottle again.”

And such, in sooth, was the sober truth;For the single fault of this saintly soulWas a desert thirst for the cup accurst,—A quenchless love for the Flowing Bowl.

When he woke at morn with a head forlornAnd a taste like a last-year swallow’s nest,He would kneel and pray, then rise and flayHis sinful body like all possessed.

Frequently tempted, he fell from grace,And as often he found the devil to pay;But by diligent scourging and diligent purgingHe managed to keep Old Nick at bay.

This was the plight of our anchorite,—An endless penance condemned to dree,—When it chanced one day there came his wayA Mystical Book with a golden Key.

This Mystical Book was a guide to health,That none might follow and go astray;While a turn of the Key unlocked the wealthThat all unknown in the Scriptures lay.

Disease is sin, the Book defined;Sickness is error to which men cling;Pain is merely a state of mind,And matter a non-existent thing.

If a tooth should ache, or a leg should break,You simply “affirm” and it’s sound again.Cut and contusion are only delusion,And indigestion a fancied pain.

For pain is naught if you “hold a thought,”Fevers fly at your simple say;You have but to affirm, and every germWill fold up its tent and steal away.

From matin gong to even-songAmbrose pondered this mystic lore,Till what had seemed fiction took on a convictionThat words had never possessed before.

“If pain,” quoth he, “is a state of mind,If a rough hair shirt to silk is kin,—If these things are error, pray where’s the terrorIn scourging and purging oneself of sin?

“It certainly seemeth good to me,By and large, in part and in whole.I’ll put it in practice and find if it fact is,Or only a mystical rigmarole.”

The very next night our anchoriteOf the Flowing Bowl drank long and deep.He argued this wise: “New Thought appliesNo fitter to lamb than it does to sheep.”

When he woke at morn with a head forlornAnd a taste akin to a parrot’s cage,He knelt and prayed, then up and flayedHis sinful flesh in a righteous rage.

Whacketty-whack on breast and back,Whacketty-whack, before, behind;But he held the thought as he laid it on,“Pain is merely a state of mind.”

Now every night our anchoriteWas exceedingly tight when he went to bed.The scourge that once pained him no longer restrained him,Nor even the fear of an aching head....