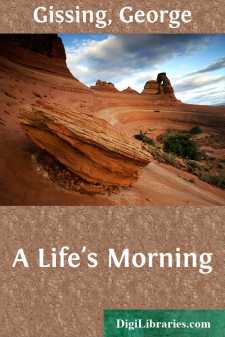 CHAPTER I AN UNDERGRADUATE AT LEISURE

Wilfrid Athel went down invalided a few days after the beginning of Trinity term. The event was not unanticipated. At Christmas it had been clear enough that he was overtaxing himself; his father remarked on the fact with anxiety, and urged moderation, his own peculiar virtue. Wilfrid, whose battle with circumstances was all before him, declined to believe that the body was anything but the very humble servant of the will. So the body took its revenge.

He had been delicate in childhood, and the stage of hardy naturalism which interposes itself between tender juvenility and the birth of self-consciousness did not in his case last long enough to establish his frame in the vigour to which it was tending. There was nothing sickly about him; it was only an excess of nervous vitality that would not allow body to keep pace with mind. He was a boy to be, intellectually, held in leash, said the doctors. But that was easier said than done. What system of sedatives could one apply to a youngster whose imagination wrought him to a fever during a simple walk by the seashore, who if books were forcibly withheld consoled himself with the composition of five-act tragedies, interspersed with lyrics to which he supplied original strains? Mr. Athel conceived a theory that such exuberance of emotionality might be counterbalanced by studies of a strictly positive nature; a tutor was engaged to ground young Wilfrid in mathematics and the physical sciences. The result was that the tutor's enthusiasm for these pursuits communicated itself after a brief repugnance to the versatile pupil; instincts of mastery became as vivid in the study of Euclid and the chemical elements as formerly in the humaner paths of learning; the plan had failed. In the upshot Wilfrid was sent to school; if that did not develop the animal in him, nothing would.

He was not quite three-and-twenty when the break-down removed him from Oxford. Going to Balliol with a scholarship, he had from the first been marked for great things, at all events by the measure of the schools. Removal from the system of home education had in truth seemed to answer in some degree the ends aimed at; the lad took his fair share of cricket and football, and kept clear of nervous crises. At the same time he made extraordinary progress with his books. He acquired with extreme facility, and his ambition never allowed him to find content in a second place; conquest became his habit; he grew to deem it the order of nature that Wilfrid Athel's name should come first in the list. Hence a reputation to support. During his early terms at Balliol he fagged as hard as the mere dullard whose dear life depended upon a first class and a subsequent tutorship. What he would make of himself in the end was uncertain; university distinctions would probably be of small moment to him as soon as they were achieved, for already he spent the greater portion of his strength in lines of study quite apart from the curriculum, and fate had blessed him with exemption from sordid cares....