A Life of St. John for the Young 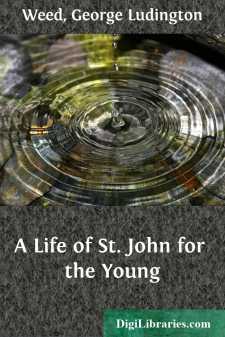 CHAPTER I A Home in the Blest Land, by the Sacred Sea

"Blest land of Judæa! Thrice hallowed in song,Where the holiest of memories pilgrim like throng,In the shade of thy palms, by the shores of thy sea,On the hills of the beauty, my heart is with thee."—Whittier.

For young people he is a fitting study. To aid such is the purpose of this volume.

Let us first glance at the land where he lived, surrounded by influences that directed his life, and moulded his character.

Palestine was called by God Himself "The Glory of All Lands." He made it the home of His people the Jews, who long waited for the promised time when it should have greater glory by becoming the home of the Messiah, the Son of God. Before He was born the Jews were conquered by the Romans, and governed by them instead of the Jewish judges and kings. The country was divided into three parts. The southern was called Judæa; the middle, Samaria; and the northern, Galilee, which was the most beautiful part. It contained the hills of Galilee, and the plain and sea of Gennesaret, hallowed by the presence of Jesus, and what He there did.

At the time of which we write, two thousand years ago, Galilee was not inhabited wholly or chiefly by Jews. Other peoples, called Gentiles, were mixed with the Jewish race which continued to cultivate the land, and to tend the vineyards and olive-yards, and to dwell in the fisherman's huts and moor their boats on the sandy beach. Some Jews were artisans, working at their trades in the smaller towns. But there were vast crowds of foreigners whose life was a great contrast to that of the Jews. Their customs were those of the nations to which they belonged. They spoke their own languages. They worshiped their own false gods. Their amusements were such as they were accustomed to in their distant homes. This was especially true of the Romans who had theatres, chariot races, and gladiatorial combats, by the peaceful waters of Galilee.

There were also Greeks who had sought new homes far from their native land. Many Arabians came from the deserts on swift horses, in roving bands in search of plunder. They wore brightly-colored dresses, and flashing swords and lances, carrying terror wherever they went. Egyptian travelers came with camels loaded with spices and balm. The bazaars were crowded with merchandise from India, Persia and Arabia. Long caravans from Damascus passed through Galilee, with goods for the markets of Tiberius on Lake Gennesaret, and the more distant cities of Jerusalem, Cæsarea and Alexandria.

The gem of Galilee and of Palestine itself, is the Lake of Gennesaret, or the Sea of Tiberius. Its length is twelve and three-fourths miles; its greatest width, seven and one-fourth; its greatest depth, one hundred and sixty feet....