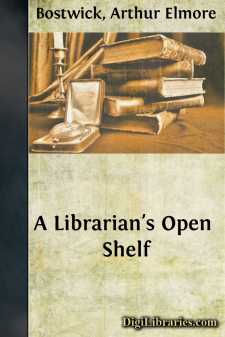 Those who are interested in the proper use of our libraries are asking continually, “What do readers read?” and the tables of class-percentages in the annual reports of those institutions show that librarians are at least making an attempt to satisfy these queries. But a question that is still more fundamental and quite as vital is: Do readers read at all? This is not a paradox, but a common-sense question, as the following suggestive little incident will show. The librarian-in-charge of a crowded branch circulating-library in New York City had occasion to talk, not long ago, to one of her “star” borrowers, a youth who had taken out his two good books a week regularly for nearly a year and whom she had looked upon as a model—so much so that she had never thought it necessary to advise with him regarding his reading. In response to a question this lad made answer somewhat as follows: “Yes, ma’am, I’m doing pretty well with my reading. I think I should get on nicely if I could only once manage to read a book through; but somehow I can’t seem to do it.” This boy had actually taken to his home nearly a hundred books, returning each regularly and borrowing another, without reading to the end of a single one of them.

That this case is not isolated and abnormal, but is typical of the way in which a large class of readers treat books, there is, as we shall see, only too much reason to believe.

The facts are peculiarly hard to get at. At first sight there would seem to be no way to find out whether the books that our libraries circulate have been read through from cover to cover, or only half through, or not at all. To be sure, each borrower might be questioned on the subject as he returned his book, but this method, would be resented as inquisitorial, and after all there would be no certainty that the data so gathered were true. By counting the stamps on the library book-card or dating-slip we can tell how many times a book has been borrowed, but this gives us no information about whether it has or has not been read. Fortunately for our present purpose, however, many works are published in a series of volumes, each of which is charged separately, and an examination of the different slips will tell us whether or not the whole work has been read through by all those who borrowed it. If, for instance in a two-volume work each volume has gone out twenty times, twenty borrowers either have read it through or have stopped somewhere in the second volume, while if the first volume is charged twenty times and the second only fourteen, it is certain that six of those who took out the first volume did not get as far as the second. In works of more than two volumes we can tell with still greater accuracy at what point the reader’s interest was insufficient to carry him further.

Such an investigation has been made of all works in more than one volume contained in seven branches of the Brooklyn Public Library, and with very few exceptions it has been found that each successive volume in a series has been read by fewer persons than the one immediately preceding....