A Letter to the Right Honorable the Lord Chancellor, on the Nature and Interpretation of Unsoundness of Mind, and Imbecility of Intellect 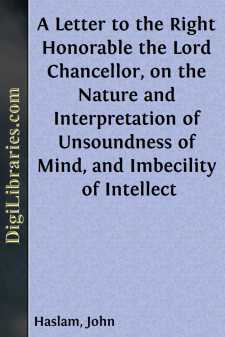 The present address originates in an anxious wish for the advancement of medical knowledge, where it is connected with those maladies of the human mind, that are referable to the court, wherein your Lordship has so long administered impartial justice. The disorders which affect the body are, in general, the exclusive province of the medical practitioner; but, by a wise provision, that has descended to us from the enlightened nations of antiquity, the law has considered those persons, whose intellectual derangement rendered them inadequate to the governance of themselves in society, or incapable of managing their affairs, entitled to its special protection. If your Lordship should feel surprized at this communication, or deem my conduct presumptuous, the thirst of information on an important subject is my only apology; and I have sought to allay it in the pure stream that issues from the fountain-head, rather than from subordinate channels or distant distributions. Although personally a stranger to your Lordship, nearly thirty years of my life have been devoted to the investigation and treatment of insanity: of which more than twenty have been professionally passed in the largest receptacle for lunatics;—and the press has diffused, in several publications, my opinions and experience concerning the human mind, both in its sound state and morbid condition.

The medical profession, of which I am an humble member, entertains very different notions concerning the nature of UNSOUNDNESS of mind, and IMBECILITY of intellect;—and this difference of opinion has been displayed on many solemn occasions, where medical testimony has been deposed.

If a physician were to attempt to search into the existing records and procedures on insanity, to collect its legal interpretation, such investigation would probably be a waste of his time, the source of abundant, and perhaps of incurable error; but to these inconveniences he will not be subjected in attentively considering your Lordship's judgments, of which I have availed myself on the present occasion, and which, having been taken down at the time they were delivered, may be presumed not materially incorrect. The documents to which I refer are the judgments of the 22d April, 1815, and the 17th December, 1822, on the Portsmouth petitions, together with the minutes of conference between your Lordship and certain physicians, on the 7th January, 1823. In the judgment on the petition of 1815, it is stated by your Lordship, "I have searched, and caused a most careful search to be made into all the records and procedures on lunacy which are extant. I believe, and I think I may venture to say, that originally commissions of this sort were of two kinds; a commission aiming at, and enquiring whether, the individual had been an idiot ex nativitate, or whether, on the other hand, he was a lunatic. The question whether he was a lunatic, being a question, admitting in the solution of it, of a decision that imputed to him at one time an extremely sound mind, but at other times, an occurrence of insanity, with reference to which, it was necessary to guard his person and his property by a commission issuing....