A Letter to the Hon. Samuel A. Eliot, Representative in Congress From the City of Boston, In Reply to His Apology For Voting For the Fugitive Slave Bill. 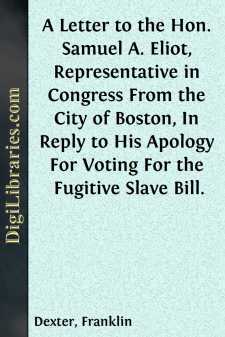 An English courtier procured a colonial judgeship for a young dependant wholly ignorant of law. The new functionary, on parting with his patron, received from him the following sage advice,—"Be careful never to assign reasons, for whether your judgments be right or wrong, your reasons will certainly be bad." You have cause to regret that some friend had not been equally provident of your reputation, and intimated that it was only expected of you to vote for Mr. Webster's measures, but by no means to assist him in vindicating them. You did, indeed, vote precisely as those who procured your nomination intended you should; yet, on your return home, you found your name had become a byword and a reproach in your native State. Another election approached, but you declined submitting your recent course to the judgment of the electors, and withdrew from the canvass. But although the people were thus prevented from voting against you, they persisted in speaking and writing against you. Anxious to relieve yourself from the load of obloquy by which you were oppressed, in an evil hour you rashly appealed to the public through the columns of a newspaper, and gave the "reasons" of your vote for the Fugitive Slave Law. You had a high and recent example of the kind of logic suited to your case. You might have indulged in transcendental nonsense, and talked about the climate, soil, and scenery of New England and the wonders of physical geography, and, assuming that negroes were created free, you might have contended that, in voting for a law to catch and enslave them, you had avoided the folly of reënacting the law of God. Reasons of this sort, you and others had declared, "had convinced the understanding and touched the conscience of the nation." Instead of following an example so illustrious and successful, you assign "reasons" so very commonplace, that the most ordinary capacity can understand them, and so feeble, that the slightest strength can overthrow them.

Your first "reason" is, that the delivery of fugitives is a constitutional obligation. By this you mean, that, by virtue of the construction of a certain clause in the Constitution by the Supreme Court, Congress has the power to pass a law for the recovery of fugitive slaves. Well, Sir, does this constitutional obligation authorize Congress to pass any law whatsoever on the subject, however atrocious and wicked? Had you voted for a law to prevent smuggling, in which you had authorized every tide-waiter to shoot any person suspected of having contraband goods in his possession, would it have been a good "reason" for such an atrocity, that the collection of duties was "a constitutional obligation"? You are condemned for voting for an arbitrary, detestable, diabolical law,—one that tramples upon the rights of conscience, outrages the feelings of humanity, discards the rules of evidence, levels all the barriers erected by the common law for the protection of personal liberty, and, in defiance of the Constitution, and against its express provisions, gives to the courts the appointment of legions of slave-catching judges....