A Letter to Hon. Charles Sumner, with 'Statements' of Outrages upon Freedmen in Georgia 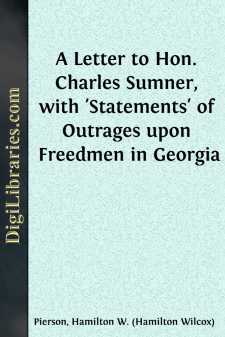 My Dear Sir: It would not become me to express an opinion upon any of the legal questions involved in the Georgia bill now before the Senate, but I respectfully call your attention to the following "statements" of facts. I certainly am not surprised that Honorable gentlemen whom I greatly esteem, should express their belief that the outrages committed upon the Freedmen and Union men in Georgia have been greatly exaggerated in the statements that have been presented to Congress and the country. I know that to persons and communities not intimately acquainted with the state of society, and the civilization developed by the institution of slavery, they seem absolutely incredible. Allow me to say, from my personal knowledge, and profoundly conscious of my responsibility to God and to history, that the statements that have been given to the public in regard to outrages in Georgia come far short of the real facts in the case. Permit me to add that I went to Andersonville, Ga., to labor as a pastor and teacher of the Freedmen, without pay, as I had labored during the war in the service of the Christian Commission; that I had nothing at all to do with the political affairs of the State; that I did not know, and, so far as I am aware, I did not see or speak to any man who held a civil office in the State, except the magistrate at Andersonville; that a few days after my arrival there I performed the first religious services, and participated in the first public honors that were ever rendered to the 13,716 "brave boys" who sleep there, by decorating the cemetery with procession, prayer, and solemn hymns to God, as described in .

My time and labors were sacredly given to the Freedmen. In addition to the usual Sabbath services I visited them in their cabins around the stockades, and in the vicinity of the cemetery, reading the Bible to them, and talking and praying with them. It was in the prosecution of these labors that I saw and heard more of sufferings and horrible outrages inflicted upon the Freedmen than I saw and heard of as inflicted upon slaves in any five years of constant horseback travel in the South before the war, when I visited thousands of plantations as agent of the American Tract society, the American Bible Society, and as President of Cumberland College, Princeton, Kentucky. As illustrations of the sufferings of these oppressed, outraged people, and of their utter helplessness and want of protection from the State or Federal courts, I give a few of the "statements" that I wrote down from their own lips. I know these men, and have entire confidence in their "statements."

Cane Cook now lives near Americus, Sumter County, Georgia. I heard through the colored people of the inhuman outrages committed upon him, and sent word to him to come to me if possible, that I might get a statement of the facts from his own lips. With the greatest difficulty he got into the cars at Americus, and came here to-day. He says:

"I worked for Robert Hodges, last year, who lives about two and-a-half miles from Andersonville, Georgia. I had my own stock, and rented land from him, agreeing to give him one-third of the corn, and one-fourth of the cotton for rent. We divided the corn by the wagon load, and had no trouble about that. I made three bags of cotton, weighing 506, 511, and 479 pounds when it was packed. Mr. Hodges weighed it again, and I don't know what he has got it down, but that was the right weight; one-fourth was his, and three-fourths mine. He told me he would buy my cotton and pay me the market price, which was twenty-one cents that day, and I told him he might have it. I got some meat and corn and other things from him during the year, and he paid me $50 in cash Christmas. I went to him last Friday a week ago, (January 29th, 1869) for a settlement. When he read over his account he had a gallon of syrup charged to me, and I told him I had not had any syrup of him. He asked me if I disputed his word. I told him that I did not want to dispute his word, but I had not had any syrup from him. He got up very angry, and took a large hickory stick and came towards me. I went backwards towards the door, and he followed me. He is a strong man and I did not want to have any trouble with him, and I gave him no impudence. I had a small piece of clap-board in my hand, that I had walked with. He told me to throw it down. I made no attempt to strike him, but held it up to keep off his blow....