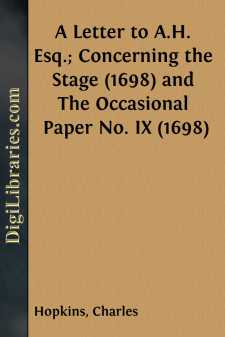 In the spring of 1698 the rumblings against the excesses of the English stage broke into a roar with the publication of Jeremy Collier's Short View of the Immorality and Profaneness of the English Stage. A wild joyousness marked Collier's attack, and at times it seemed as though the zeal of the Lord had eaten him up. But he was no enthusiast without plan or reason. A man of some learning, he used it for all it was worth to confound the playwrights and the critics.

Collier was careful to make good use of accepted and honored critical principles. He contended that the purpose of the stage is to instruct; he argued for poetic justice; he discussed the unities; he spoke of propriety of manners and language; and he warned of the danger of fancy's overriding judgment—"the Fancy may be gain'd, and the Guards corrupted, and Reason suborn'd against itself." Unfortunately for Collier, however, such argument from reason and critical theory was only part of his book. He pretended to be attacking the current excesses, but a reading of his entire book gives the definite impression that he was really opposing the stage as an institution. His enemies were quick to point this out. He also weakened his argument by finding bawdry where there was none, overlooking the many unquestionably off-color passages in the Restoration plays. Furthermore he was extremely touchy about the clergy, arguing violently that no priest should ever be satirized. In short, Collier weakened a strong position by immoderate demands and contentions.

After a short, uneasy silence, the defenders of the stage began to answer. By the end of the summer, ten rejoinders had appeared, among which was the anonymous A Letter to A.H. Esq; Concerning the Stage. The initials in the title have been identified as those of Anthony Hammond, pamphleteer, small poet, and politician, whom Bolingbroke characterized as "silver-tongued Hammond." Charles Hopkins has been suggested as the probable author of the pamphlet (E.N. Hooker, Modern Language Notes, LIV [1939], 388). Hopkins was a wit, a friend of Hammond, as of Dryden, Congreve, Dorset, Southerne, and Wycherley, a clever fellow who loved the bottle and the ladies so much that, according to Giles Jacob, he died at 36, "a Martyr to the cause." His Epistolary Poems, published in 1694, had been dedicated to Hammond and had included an effusive poem addressed to him. Some other wit among Hammond's friends might have been the author of the pamphlet, however, for Hammond yearned for immortality through the works of others and frequently asked writers of his acquaintance to mention him.

Whoever the author was, he spotted the weaknesses in Collier's arguments, at the same time pointing out the essential usefulness of the Short View as a corrective. He was not particularly original, for many of the points he made were considered public property by writers in the controversy. Thus, along with Dennis and others, the writer admitted the necessity for reform, but opposed Collier's apparent desire to abolish the stage....