A Letter from the Lord Bishop of London, to the Clergy and People of London and Westminster; On Occasion of the Late Earthquakes 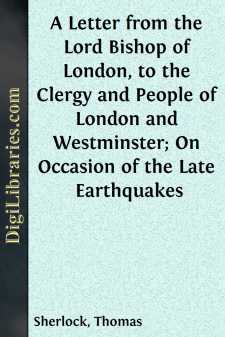 The Relation I stand in to you, is a daily Call upon me to consider the spiritual State of these great Cities; and tho' I doubt not but God has many faithful and chosen Servants among you, yet the general View of the Wickedness and Corruption that abound, and are spreading far and wide, gives me, and must give to every serious Christian very painful Reflexions: It is hardly possible to think of the History of Providence, recorded in Holy Writ, and the many Examples of Divine Justice exercised, sometimes in punishing, sometimes in utterly destroying wicked Nations, or Cities, without being sensibly affected with Apprehensions for ourselves: But more especially have we Reason to fear, when we see the Beginning of Sorrows, and the Displeasure of the Almighty manifested in the Calamities we suffer under, and in the Signs and Tokens given us to expect a far more dreadful Judgment.

It is every Man's Duty, and it is mine to call upon you, to give Attention to all the Warnings which God in his Mercy affords to a sinful People: Such Warning we have had, by two great Shocks of an Earthquake; a Warning, which seems to have been immediately and especially directed to these great Cities, and the Neighbourhood of them; where the Violence of the Earthquake was so sensible, tho' in distant Parts hardly felt, that it will be Blindness wilful and inexcusable not to apply to ourselves this strong Summons, from God, to Repentance.

Thoughtless or hardened Sinners may be deaf to these Calls; and Little Philosophers, who see a little, and but very little into natural Causes, may think they see enough to account for what happens, without calling in the Aid and Assistance of a special Providence; not considering, that God who made all Things, never put any Thing out of his own Power, but has all Nature under Command to serve his Purposes in the Government of the World. But be their Imaginations to themselves, the Subject is too serious for trifling; and calls us off to other Views.

If we consider the general Government of the World by God, and upon what Reasons and Motives he acts, when he brings Calamities and Plagues upon any People: Or if we recollect from History sacred and profane, what State and Condition with respect to Religion and Morality, the People were in, who have been Examples of Justice: And then compare our own Case with the general Reason by which Providence acts, and with the Circumstances of those by whose Example we ought to take Warning, we shall soon discover whether there be just Reason for our Apprehensions. If those who have been destroyed by Fire from Heaven, or swallowed up by the Earth were Sinners, and we are righteous, let us fear nothing, nor be dismayed though the Foundations of the Earth be removed: But if our Consciences tell us, that we have sinned after their Example, what Consolation is there to be had against the just Expectation of suffering after their Example also?

The same Conclusion will arise from a Contemplation of God's general Providence; which tho' it is not daily exerted in punishing all Men, or all Vices that deserve it; yet is always armed with Power to stop outrageous Wickedness; and he has told us in his holy Word, what we may expect from his Justice, when we are grown hardened and obdurate against his Mercy....