A Lecture on the Study of History 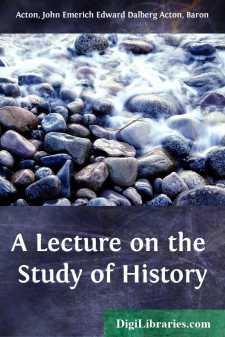 I look back to-day to a time before the middle of the century, when I wasUNITY OF MODERN HISTORY reading at Edinburgh, and fervently wishing to come to this University. At three colleges I applied for admission, and, as things then were, I was refused by all. Here, from the first, I vainly fixed my hopes, and here, in a happier hour, after five-and-forty years, they are at last fulfilled.

I desire first to speak to you of that which I may reasonably call the Unity of Modern History, as an easy approach to questions necessary to be met on the threshold by any one occupying this place, which my predecessor has made so formidable to me by the reflected lustre of his name.

You have often heard it said that Modern History is a subject to which neither beginning nor end can be assigned. No beginning, because the dense web of the fortunes of man is woven without a void; because, in society as in nature, the structure is continuous, and we can trace things back uninterruptedly, until we dimly descry the Declaration of Independence in the forests of Germany. No end, because, on the same principle, history made and history making are scientifically inseparable and separately unmeaning.

“Politics,” said Sir John Seeley, “are vulgar when they are not liberalised by history, and history fades into mere literatureLINK BETWEEN HISTORY AND POLITICS when it loses sight of its relation to practical politics.” Everybody perceives the sense in which this is true. For the science of politics is the one science that is deposited by the stream of history, like grains of gold in the sand of a river; and the knowledge of the past, the record of truths revealed by experience, is eminently practical, as an instrument of action, and a power that goes to the making of the future. In France, such is the weight attached to the study of our own time, that there is an appointed course of contemporary history, with appropriate textbooks. That is a chair which, in the progressive division of labour by which both science and government prosper, may some day be founded in this country. Meantime, we do well to acknowledge the points at which the two epochs diverge. For the contemporary differs from the modern in this, that many of its facts cannot by us be definitely ascertained. The living do not give up their secrets with the candour of the dead; one key is always excepted, and a generation passes before we can ensure accuracy. Common report and outward seeming are bad copies of the reality, as the initiated know it. Even of a thing so memorable as the war of 1870, the true cause is still obscure; much that we believed has been scattered to the winds in the last six months, and further revelations by important witnesses are about to appear. The use of history turns far more on certainty than on abundance of acquired information.

Beyond the question of certainty is the question of detachment. The process by which principles are discovered and appropriated is other than that by which, in practice, they are applied; and our most sacred and disinterested convictions ought to take shape in the tranquil regions of the air, above the tumult and the tempest of active life. For a man is justly despised who has one opinion in history and another in politics, one for abroad and another at home, one for opposition and another for office....