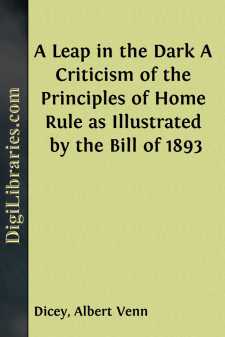 Irish Unionists have pressed for a republication of A Leap in the Dark. They hold that it will be of some service in their resistance to the Coalition of Home Rulers, Socialists, and Separatists formed to force upon the people of England and of Scotland a virtual dissolution of the Union between Great Britain and Ireland. It would in any case have been a pleasure to afford aid, however small, to the Irish Unionists, whether Protestants or Catholics, engaged in the defence at once of their own birthright and of the political unity of the United Kingdom. Yet for a moment I doubted whether the republication of a forgotten criticism of a forgotten Bill would be of essential service to my friends. On reflection, however, I have come to see that, though the Unionists of Ireland probably overrate the practical value of my book, yet their hope of its serving the cause whereof they are the most valiant defenders is based on sound reasons.

A Leap in the Dark is a stringent criticism of the Home Rule Bill, 1893. But the book has little to do with the details and intricacies of that Bill. A Leap in the Dark was published before the Home Rule Bill of 1893 had reached the House of Lords, or had assumed that final form, which made patent to the vast majority of British electors that a measure which purported to give a limited amount of independence to Ireland, in reality threatened England with political ruin. My criticism is therefore in truth an attack upon the fundamental principles of Home Rule, as advocated by Gladstone and his followers eighteen years ago. These principles, moreover, have never been repudiated by the Home Rulers of to-day. Some members of the present Cabinet, notably the Prime Minister and Lord Morley, were the apologists of the Bill of 1893. In that year A Leap in the Dark, or Our New Constitution, was, I venture to say, accepted by leading Unionists, such as Lord Salisbury, the Duke of Devonshire, Mr. Balfour, Mr. Chamberlain, Sir Henry James (now Lord James of Hereford), as, in the main, an adequate representation of the objections which, in the judgment of such men and thousands of Unionists, were fatal to the acceptance of any scheme whatever of Home Rule for Ireland. The battle over Home Rule lasting, as it did for years, and ending with the complete victory of the Unionists, has been forgotten by or has never become known to the mass of the present electors. It is well that they should be reminded of the solid grounds for the rejection by the Lords of the Home Rule Bill of 1893. It is well that they should be reminded that this rejection was in 1895 ratified by the approval of the electorate of the United Kingdom A Leap in the Dark will assuredly remind my readers that in 1893 the hereditary House of Lords, and not the newly elected House of Commons, truly represented the will of the nation. This is a fact never to be forgotten. It is of special import at the present moment. Another equally undoubted fact deserves attention. Home Rulers themselves despair of carrying a Home Rule Bill until they shall have turned the Parliament Bill into the Parliament Act, 1911, and my readers ought never to forget that the passing of the Parliament Bill into law destroys, and is meant to destroy, every security against the passing of any Home Rule Bill whatever which the present majority of the House of Commons choose to support....