A Lady's Life on a Farm in Manitoba 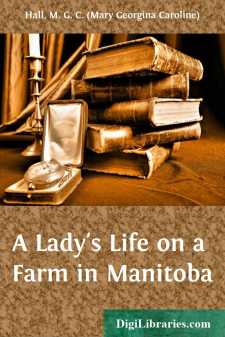 I sadly fear I must have contributed more paving-stones for a certain region; for many good resolutions did I make in starting, and not one of them has been kept, not even so much as writing daily a portion of a letter to be sent home from New York. And now my long story will have to be cut short, and the doings of the last fifteen days will have to be crowded into a very limited space; for we are in sight of land, and our excitement can only be compared to that of school boys the last day of the term. The joy of landing will not be unmingled with regrets in parting from our fellow-passengers, with whom we have become fast friends; and we are inclined mutually to believe in transmigration of souls, and that we must have known each other in some prior state. Some are going into Minnesota, three of them having bought 13,000 acres in the Red River valley, which they are going to farm on a large scale, and hope in four years to have made fortunes, another owns mines in Colorado, having been one of the first pioneers of the San Juan district; he is in a fair way to a princely fortune. I fear golden apples will not be strewn on our paths, even though we are bound the furthest west. Fifteen days have we been out of sight of land; two days out from Queenstown we broke a piston-rod, which obliged us to lay to, in a fearfully rough sea, for five hours. Next day one of our four boilers burst, and again another piston-rod; which accidents, combined with contrary winds and heavy seas, reduced our speed to nearly half for the remainder of the journey. Our spirits have not flagged, as, thanks to various small games such as pitch-and-toss, running races when the ship was rolling, quoits, and cards, we have not found time unbearably long. The last few days we have had big sweepstakes on the run of the ship; but, unfortunately, none of our party have won them. One evening we had a concert; but you may imagine the talent on board was not great when they had to call upon one of us to accompany the prima donna, and the other to sing a second in a duet; another evening we danced—or rather tried to—our band consisting of a concertina and a flute, played by two of the steerage passengers, but the vessel rolled so persistently that we often lost our equilibrium and reeled like drunken men and women.

I must stop: curiosity bids me go on deck. We shall shortly be in the quarantine harbour, the entrance of which is said to be very fine; though I very much doubt our being able to see anything, as, in spite of being in this much boasted climate of the new world, it is raining and is dull enough to rejoice the hearts of true John Bulls like your daughter's.

I hope you will have got our letters sent off by the ship's boat the night before we were allowed to land, as, though we arrived in the quarantine harbour at 7 o'clock, it was too late for the Custom-house and medical officers to inspect us; we therefore had to lay to, and only moved up to the wharf about 8 o'clock the next morning....