A Lady's Life in the Rocky Mountains 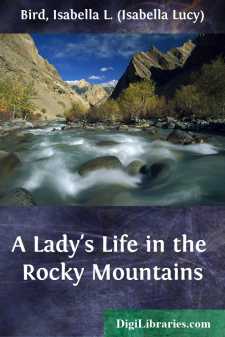 I have found a dream of beauty at which one might look all one's life and sigh. Not lovable, like the Sandwich Islands, but beautiful in its own way! A strictly North American beauty—snow-splotched mountains, huge pines, red-woods, sugar pines, silver spruce; a crystalline atmosphere, waves of the richest color; and a pine-hung lake which mirrors all beauty on its surface. Lake Tahoe is before me, a sheet of water twenty-two miles long by ten broad, and in some places 1,700 feet deep. It lies at a height of 6,000 feet, and the snow-crowned summits which wall it in are from 8,000 to 11,000 feet in altitude. The air is keen and elastic. There is no sound but the distant and slightly musical ring of the lumberer's axe.

It is a weariness to go back, even in thought, to the clang of San Francisco, which I left in its cold morning fog early yesterday, driving to the Oakland ferry through streets with side-walks heaped with thousands of cantaloupe and water-melons, tomatoes, cucumbers, squashes, pears, grapes, peaches, apricots—all of startling size as compared with any I ever saw before. Other streets were piled with sacks of flour, left out all night, owing to the security from rain at this season. I pass hastily over the early part of the journey, the crossing the bay in a fog as chill as November, the number of "lunch baskets," which gave the car the look of conveying a great picnic party, the last view of the Pacific, on which I had looked for nearly a year, the fierce sunshine and brilliant sky inland, the look of long RAINLESSNESS, which one may not call drought, the valleys with sides crimson with the poison oak, the dusty vineyards, with great purple clusters thick among the leaves, and between the vines great dusty melons lying on the dusty earth. From off the boundless harvest fields the grain was carried in June, and it is now stacked in sacks along the track, awaiting freightage. California is a "land flowing with milk and honey." The barns are bursting with fullness. In the dusty orchards the apple and pear branches are supported, that they may not break down under the weight of fruit; melons, tomatoes, and squashes of gigantic size lie almost unheeded on the ground; fat cattle, gorged almost to repletion, shade themselves under the oaks; superb "red" horses shine, not with grooming, but with condition; and thriving farms everywhere show on what a solid basis the prosperity of the "Golden State" is founded. Very uninviting, however rich, was the blazing Sacramento Valley, and very repulsive the city of Sacramento, which, at a distance of 125 miles from the Pacific, has an elevation of only thirty feet. The mercury stood at 103 degrees in the shade, and the fine white dust was stifling.

In the late afternoon we began the ascent of the Sierras, whose sawlike points had been in sight for many miles....