A Labrador Doctor The Autobiography of Wilfred Thomason Grenfell 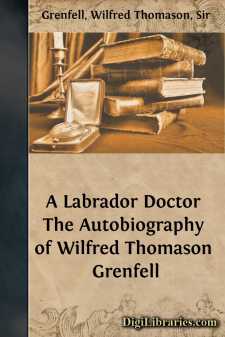 To be born on the 28th of February is not altogether without its compensations. It affords a subject of conversation when you are asked to put your name in birthday books. It is evident that many people suppose it to be almost an intrusion to appear on that day. However, it was perfectly satisfactory to me so long as it was not the 29th. As a boy, that was all for which I cared. Still, I used at times to be oppressed by the danger, so narrowly missed, of growing up with undue deliberation.

The event occurred in 1865 in Parkgate, near Chester, England, whither my parents had moved to enable my father to take over the school of his uncle. I was always told that what might be called boisterous weather signalled my arrival. Experience has since shown me that that need not be considered a particularly ominous portent in the winter season on the Sands of Dee.

It is fortunate that the selection of our birthplace is not left to ourselves. It would most certainly be one of those small decisions which would later add to the things over which we worry. I can see how it would have acted in my own case. For my paternal forbears are really of Cornish extraction—a corner of our little Island to which attaches all the romantic aroma of the men, who, in defence of England, "swept the Spanish Main," and so long successfully singed the Bang of Spain's beard, men whose exploits never fail to stir the best blood of Englishmen, and among whom my direct ancestors had the privilege of playing no undistinguished part. On the other hand, my visits thither have—romance aside—convinced me that the restricted foreshore and the precipitous cliffs are a handicap to the development of youth, compared with the broad expanses of tempting sands, which are after all associated with another kinsman, whose songs have helped to make them famous, Charles Kingsley.

My mother was born in India, her father being a colonel of many campaigns, and her brother an engineer officer in charge during the siege of Lucknow till relieved by Sir Henry Havelock. At the first Delhi Durbar no less than forty-eight of my cousins met, all being officers either of the Indian military or civil service.

To the modern progressive mind the wide sands are a stumbling-block. Silting up with the years, they have closed the river to navigation, and converted our once famous Roman city of Chester into a sleepy, second-rate market-town. The great flood of commerce from the New World sweeps contemptuously past our estuary, and finds its clearing-house under the eternal, assertive smoke clouds which camouflage the miles of throbbing docks and slums called Liverpool—little more than a dozen miles distant. But the heather-clad hills of Heswall, and the old red sandstone ridge, which form the ancient borough of the "Hundred of Wirral," afford an efficient shelter from the insistent taint of out-of-the-worldness.

Every inch of the Sands of Dee were dear to me. I learned to know their every bank and gutter. Away beyond them there was a mystery in the blue hills of the Welsh shore, only cut off from us children in reality by the narrow, rapid water of the channel we called the Deep....