A Key to the Knowledge of Church History (Ancient) 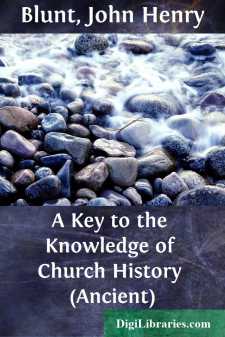 Before entering upon an account of the Foundation and After-History of the Christian Church, it may be well to consider what that Church really is.

Section 1. Definition of the Church.

Twofold nature of the Church.

The Church may be regarded in a twofold aspect, as an external Corporation, and as a spiritual Body.

In the first light it is a Kingdom, in the world, though not of the world, extending through different and widely-separated countries, often seemingly divided by outward circumstances, but, in reality, having all its parts subject to the same Invisible King, governed by laws which He has given, and by means of those whom He has appointed to be His representatives on earth.

In its spiritual sense the Church is the One Mystical Body of Christ, of which men are made members by Holy Baptism, and in which they are nourished and built up by the Holy Eucharist, and the other means of grace. These means of grace are dispensed by Priests, who receive authority and power to execute their ministerial functions from Bishops, successors of the Apostles, and are assisted in their ministry by the inferior order of Deacons.

Future destiny of the Church.

The members of this Mystical Body, after passing through their appointed probation in this world, and being built up more and more, if they continue faithful, into Christ their Head, are removed to join the Church at rest in Paradise. There they await the Resurrection and Final Judgment, after which the "Church Militant here on earth" will become the Church Triumphant in Heaven.

The Church exists through and by the Incarnation, applied to each individual in Holy Baptism, and the Holy Eucharist.

The existence of the Church is the consequence and fruit of the Incarnation and Death of her Divine Head; the spiritual life of all her members being derived from their union with our Blessed Lord's Sacred Humanity, whereby they are also made "partakers of the Divine Nature[1]," their birth-sin being at the same time washed away by the Virtue of His Cleansing Blood. This Life, once begun, is kept up in faithful Christians by believing and persevering use of the Mystical Food provided for its sustenance in their souls—the Blessed Body and Precious Blood thus given to them being a continual extension of the Incarnation; whilst their actual sins are forgiven by the absolving Word of the Priest, and the Pleading of the One Sacrifice, unceasingly presented in Heaven, and constantly shown forth and mystically offered on the Altars of the Church on earth.

Foreshadowings of the Church and the Redeemer's sacrifice under the Patriarchal

From the time of the Fall and the merciful Promise of a Redeemer, "the Seed of the woman," there is also a foreshadowing of the Church as the appointed way by which mankind should lay hold on the salvation thus provided for them. The Patriarchs were priests in their own tribes, for which they continually offered up sacrifices to Almighty God; and to this patriarchal system succeeded the Mosaical Dispensation with an elaborate ceremonial, each minute detail of which was laid down by direct revelation from God Himself.