A Journey to Katmandu (the Capital of Napaul), with The Camp of Jung Bahadoor; including A Sketch of the Nepaulese Ambassador at Home 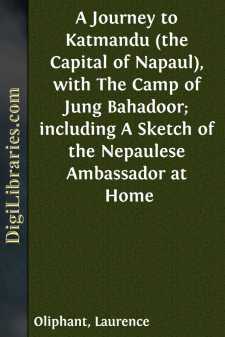 Towards the close of the year 1850 a considerable sensation was created in the usually quiet town of Colombo by the arrival in Ceylon of His Excellency General Jung Bahadoor, the Nepaulese Ambassador, on his return to Nepaul, bearing the letter of the Queen of England to the Rajah of that country.

The accounts which had preceded him of the magnificence of the jewels with which his person was generally adorned, had raised expectations amongst the natives which were doomed to disappointment: intelligence had been received by Jung of the death of the Queen of Nepaul, and the whole Embassy was in deep mourning, so that their appearance on landing created no little astonishment, clad, as they all were, in spotless white, excepting their shoes, which were of black cloth—leather not being allowed to form part of the Nepaulese mourning costume.

His Excellency had a careworn expression of countenance, which might have been caused either by the dissipation attendant upon the gaieties of his visit to London, by grief for his deceased Queen, or by sea-sickness during his recent stormy passage across the Gulf of Manaar.  He had been visiting sundry Hindoo shrines, and it was for the purpose of worshipping at the temple of Ramiseram, which is situate on the island of that name, in the Gulf of Manaar, forming part of Adam’s Bridge, that he touched at Colombo.  Here I was fortunate enough to make his acquaintance, and, attracted by his glowing description of sport in Nepaul, accepted an invitation to accompany him to that country, in order to judge of it for myself.

So good an opportunity is indeed rarely afforded to a European of visiting Nepaul, and of inspecting the internal economy of its semi-barbarous Court.  I soon found that Jung Bahadoor excelled no less as a travelling companion than he had done as Premier and Ambassador.

As doubts had arisen and some misapprehension had prevailed in England as to his position in his own country, I was anxious to ascertain what was his real rank and how he would be received there.  It was reported that he had risked his temporal welfare by quitting his country, while, in order that his eternal welfare should in no way be compromised by this bold and novel proceeding, he had obtained an express reservation to be made in his favour at Benares, overcoming, by means of considerable presents, the scruples of a rapacious and not very conscientious priesthood.

The ostensible object of the mission had reference, as far as I could learn, to a portion of the Terai (a district lying upon the northern frontier of British India) which formerly belonged to Nepaul, and which was annexed by the Indian Government after the war of 1815-16; but it is probable that other motives than any so purely patriotic actuated the Prime Minister.  His observant and inquiring mind had long regarded the British power in India with wonder and admiration—sentiments almost unknown amongst the apathetic Orientals, who, for the most part, have become too much accustomed to the English to look upon them with the same feelings as are entertained towards them by the hardy and almost savage race inhabiting the wild valleys of the Himalayas....