A Journey through the Kingdom of Oude, Volumes I & II 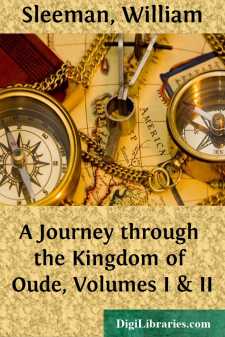 December 1, 1849.—I left Lucknow to proceed on a tour through Oude, to see the state of the country and the condition of the people. My wish to do so I communicated to Government, on the 29th of March last, and its sanction was conveyed to me, in a letter from the Secretary, dated the 7th of April. On the 16th of November I reported to Government my intention to proceed, under this sanction, on the 1st of December, and on the 19th I sent the same intimation to the King. On the 28th, as soon as the ceremonies of the Mohurrum terminated, His Majesty expressed a wish to see me on the following day; and on the 29th I went at 9 A.M., accompanied by Captain Bird, the first Assistant, and Lieutenant Weston, the Superintendant of the Frontier Police, and took leave of the King, with mutual expression of good-will. The minister, Alee Nakee Khan, was present. On the 30th I made over charge of the Treasury to Captain Bird, who has the charge of the department of the Sipahees' Petitions and the Fyzabad Guaranteed Pensions; and, taking with me all the office establishments not required in these three departments, proceeded, under the usual salute, to Chenahut, eight miles.*

[* My escort consisted, of two companies of sipahees, from the 10th Regiment Native Infantry, and my party of Captain Hardwick, lieutenant Weston, and Lieutenant and Mrs. Willows and my wife and children, with occasional visitors from Lucknow and elsewhere.]

The Minister, Dewan and Deputy Minister, Ghoolam Ruza, came out the first stage with me, and our friend Moonuwur-od Dowla, drove out to see us in the evening.

December 2, 1849.—We proceeded to Nawabgunge, the minister riding out with me, for some miles, to take leave, as I sat in my tonjohn. At sunrise I ventured, for the first time since I broke my left thigh-bone on the 4th April, to mount an elephant, the better to see the country. The land, on both sides of the road, well cultivated, and studded with groves of mango and other trees, and very fertile.

The two purgunnas of Nawabgunge and Sidhore are under the charge of Aga Ahmud, the Amil, who has under him two naibs or deputies, Ghoolam Abbas and Mahummud Ameer. All three are obliged to connive at the iniquities of a Landholder, Ghoolam Huzrut, who resides on his small estate of Jhareeapoora, which he is augmenting, in a manner too common in Oude, by seizing on the estates of his weaker neighbours. He wanted to increase the number of his followers, and on the 10th of November 1849, he sent some men to aid the prisoners in the great jail at Lucknow to break out. Five of them were killed in the attempt, seven were wounded, and twenty-five were retaken, but forty-five escaped, and among them Fuzl Allee, one of the four assassins, who, in April 1847, cut down the late minister, Ameen-od Dowla, in the midst of his followers, in one of the principal streets of Lucknow, through which the road, leading from the city to Cawnpore, now passes....