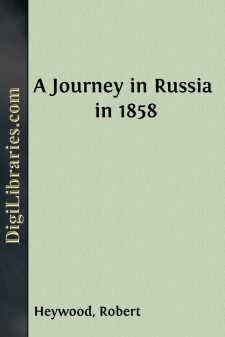 At the urgent request of our worthy and most active President, I have been induced to follow the example of several other friends of this Institution, and bring before you some account of a short visit to St. Petersburg and Moscow.

I may premise that about fourteen years ago, on our return from Egypt, vià Constantinople, I and my companion, Mr. Charles Darbishire, were placed in quarantine at a station overlooking the Black Sea. Along with us we had a Russian nobleman and his tutor, who were returning from a pilgrimage to Jerusalem.

During the fifteen days' confinement, whilst occupying separate apartments, we frequently interchanged visits, and on such occasions the manners and condition of our respective countries became the frequent subject of conversation.

Such discussions did not terminate without receiving urgent invitations to visit Russia, offering, at the same time, to procure for us every facility for seeing the cities to advantage; and also an order from the gentleman's father, who was at the head of the postal department, which would command for us horses and conveyances through every part of Russia.

Since that time I have frequently contemplated visiting the north of Europe, but, from various causes, have deferred such undertaking till the last summer, when, finding my fellow traveller unwilling to leave home, I induced another individual to accompany me after much difficulty in reconciling herself to so long an absence from attractions usually found at home.

We set off on the 17th of June, and sailed the following day from Grimsby for St. Petersburg in the "Atlantic," a fine screw steamer, 1,600 tons burden, 284 feet long, and engines of 400 horse power, with thirty passengers.

On setting out the weather was delightful, with a smooth sea, so that we remained on deck all day, enjoying the promenade, though it was somewhat restricted by numerous bales of cotton.

The following day proved cloudy and much colder, followed by a stiff breeze through the night, rocking some of us without getting us to sleep.

On the 20th we rejoiced to see terra firma, and about ten in the evening landed a passenger at Elsinore.

Here the sea becomes much narrower, bringing into view more than fifty vessels, no longer delayed by the payment of Sound dues which were compounded for some years ago with the kingdom of Denmark.

Early the following morning we anchored opposite Copenhagen, and a boat being sent off for provisions, enabled some of us to go ashore and walk through some of the principal streets and take a glance at one of their numerous public gardens.

On resuming our course, we passed a long range of nets kept afloat by logs of wood every thirty or forty yards; and near Goat Island we observed a large number of planks floating by for several hours, the cargo of some unfortunate vessel. Here we saw three gulls, the only birds we had observed in all our passage, and no fish, not even a porpoise, which should more readily be excused as they are mostly seen in stormy weather.

In the course of conversation with one of the passengers we were glad to learn that our Russian friend was residing in one of the palaces at St. Petersburg, and also that he would be able to render us most valuable services....