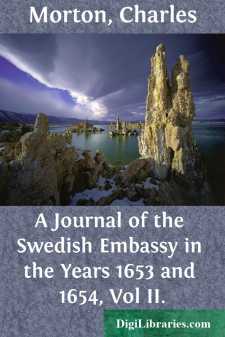 Whitelocke continues the negotiation. Now was the heat of Whitelocke’s business, and many cross endeavours used to render all his labours fruitless, and to bring his treaty to no effect. But it pleased God, in whom his confidence was placed, to carry him through all his difficulties, and to give his blessing and success to this negotiation.

Whitelocke gave a visit to the Count de Montecuculi, to give him the welcome home from his journey with the Queen; who said he had commands to kiss the hand of the Prince of Sweden, and took the opportunity of accompanying her Majesty when she went to meet the Prince. He communicated nothing of the business to Whitelocke, nor did he think to inquire it of him.

After Whitelocke returned home, the Resident of France and Woolfeldt met at his house to visit him, and staid with him three hours. They had much discourse of France, and of the Duke of Lorraine, and of the policy of the Spaniard in entertaining that Duke in his service; by means whereof the country where the Duke’s soldiers were quartered was better satisfied than with the Spanish forces, so that there was no tax levied for them, only they took free quarter, and sometimes a contribution upon the receiving of a new officer. And Woolfeldt said, that whereas all other Princes give wages to their officers and soldiers, the Duke gives no pay; but when he makes an officer, the officer pays money to the Duke for his commission; and that he knew a captain of horse who gave a thousand crowns for his commission, which the captain afterwards raised upon the country, and the Duke connived at it. He told how he was employed to treat with the Duke for the transportation of five thousand foot and three thousand horse into Ireland, to assist our King; which the Duke undertook on condition to have a hundred thousand crowns in ready money, and ships to transport his men from some haven in France, none of which could be effected.

Advances from France. After Woolfeldt went away, the French Resident asked Whitelocke whether France were comprised in the treaty with Holland. Whitelocke said he had no information thereof. The Resident replied, that his master would willingly entertain a good friendship and correspondence with England; and Whitelocke said, he believed England would be ready to do the like with France. The Resident said, he observed by their discourse that Whitelocke had been in France, and that the late King would have given him the command of a troop of horse in France; and he hoped that Whitelocke would retain a good opinion of that country, and be their friend. Whitelocke replied, that he was very civilly treated in France, and believed that he should have served the late King there, if, by a sudden accident or misfortune, he had not been prevented, and obliged to return for England sooner than he intended; and that he should be always ready (as he held himself engaged) to pay all respects and service to that Crown, as far as might consist with the interest of the Commonwealth whom he served.