A Journal of a Visit of Three Days to Skibbereen, and its Neighbourhood 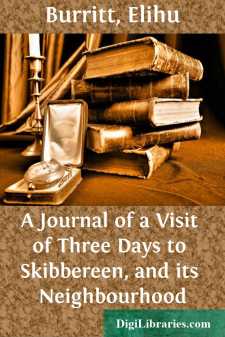 Elihu Burritt, well known on both sides of the Atlantic by his devoted labours for the good of mankind, especially in the promotion of peace and universal brotherhood, has recently paid a visit to some of the distressed parts of Ireland, principally with a view of sending a statement of facts, from his own observation, to his native country, together with an appeal on behalf of the sufferers under the awful pressure of famine and disease.

In this appeal, which was sent to the United States by the last steam packet, Elihu Burritt, speaking of the locality he had visited, says:—"I have come to this indescribable scene of destitution, desolation, and death, that I might get the nearer to your sympathies; that I might bring these terrible realities of human misery more vividly within your comprehension. I have witnessed scenes that no language of mine can portray. I have seen how much beings, made in the image of God, can suffer on this side the grave, and that too in a civilized land."

The reader will judge for himself, when he has perused the following record of only three days of this journey, whether the foregoing language is too strong. Although the fearful facts Elihu Burritt relates may have found a parallel in the statements of others, it is thought desirable to publish them in this country, as he recently witnessed them in the very district to which the sympathies of the English have been, for several months past, particularly directed, and for which locality large subscriptions have been specially contributed. A single individual is reported to have given £1000 for Skibbereen. Yet, notwithstanding all that has been subscribed, up to the period when this journal was written, no effectual means had been adopted for the decent interment of the dead, or even for their timely removal from the hovels of the living, and the great expenditure of the British Government, appears to have effected, at least in this district, but little mitigation of the fearful calamity.

There are many noble instances of individual sacrifices by personal attention to the sufferers, and other efforts for their relief, but nothing short of a law to give the poor of Ireland the right to claim support from the owners of the soil, before they are reduced to starvation, will effectually meet the evil, or be any security against its recurrence.

The Poor Law of England admits the claim of the people for support from the land and other fixed property; and, until this is given, neither landlord or mortgagee is entitled to rent or interest.

This should be fully applied to Irish legislation, and partial and unjust laws removed, including those of primogeniture and entail. To the neglect of these measures and that of giving the cultivators of the soil a proper security for the labour and expense which they bestow upon it, is mainly to be attributed the fact that a country possessing some of the finest natural advantages in the world, and which could be rendered capable of supporting in comfort at least three times its present population, is now overspread with such extreme human misery that the awful scenes portrayed in the following pages cease to excite a thrill of horror.

THREE DAYS AT SKIBBEREEN,AND ITS VICINITY.

Skibbereen, Saturday, February 20.—Rev. Mr. F—— called with several gentlemen of the town, and in their company I took my first walk through this Potter's Field of destitution and death. As soon as we opened the door, a crowd of haggard creatures pressed upon us, and, with agonizing prayers for bread, followed us to the soup-house. One poor woman, whose entreaties became irresistibly importunate, had watched all night in the grave-yard, lest the body of her husband should be stolen from his resting place, to which he had been consigned yesterday. She had left five children sick with the famine fever in her hovel, and she raised an exceedingly bitter cry for help. A man with swollen feet pressed closely upon us, and begged for bread most piteously. He had pawned his shoes for food, which he had already consumed. The soup-house was surrounded by a cloud of these famine spectres, half naked, and standing or sitting in the mud, beneath a cold, drizzling rain. The narrow defile to the dispensary bar was choked with young and old of both sexes, struggling forward with their rusty tin and iron vessels for soup, some of them upon all fours, like famished beasts. There was a cheap bread dispensary opened in one end of the building, and the principal pressure was at the door of this. Among the attenuated apparitions of humanity that thronged this gate of stinted charity, one poor man presented himself under circumstances that even distinguished his case from the rest....