A Journal From Our Legation in Belgium 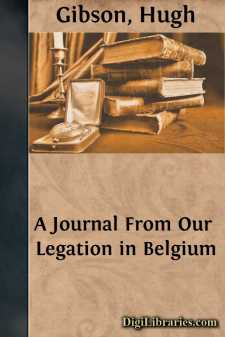 This volume is not a carefully prepared treatise on the war. It does not set out to prove anything. It is merely what its title indicates—a private journal jotted down hastily from day to day in odd moments, when more pressing duties would permit. Much material has been eliminated as of little interest. Other material of interest has been left out because it cannot be published at this time. It is believed, however, that what is printed here will suffice to give some idea of life in Belgium during the first few months of the war.

I have eliminated from the journal most of the matter about the early history of the Commission for Relief in Belgium. My day-to-day record did not do any sort of justice to the subject, and since it was not adequate, I have preferred to eliminate all but such casual reference to the relief work as is necessary to maintain the narrative. I am reconciled to this treatment of the subject by the knowledge that the story will be told comprehensively and well by Dr. Vernon Kellogg, who will soon publish an authoritative history of the Commission's work. As former Director of the Commission in Belgium, he has the detailed knowledge of its workings and the sympathetic understanding of its purpose, which peculiarly fit him for the task.

The work of the Commission is of a scope and significance that few of us realise. It is without doubt the greatest humanitarian enterprise in history, conducted under conditions of almost incredible difficulty. To those who had an understanding of the work, it had a compelling appeal, not only as an opportunity for service but also as the greatest conservation project of all time—the conservation of one of the finest races of our civilisation.

In its inception and execution, the work of the Commission is distinctively American. Its inception was in the mind of Herbert Hoover; in its execution he had the whole-hearted assistance of a little band of quiet American gentlemen who laboured in Belgium from the autumn of 1914 until we entered the war in April of this year. They came from all parts of our country and from all walks of life. They were simple work-a-day Americans, welded together by unwavering devotion to the common task and to Herbert Hoover, the "Chief." It was the splendid human side of the Commission that made it succeed in spite of all obstacles, and that part of the story will be hard to tell.

The gallant little band is now widely scattered. Some are carrying on their old work from Holland or England or America in order to ensure a steady flow of food to Belgium. Others are serving our Government in various capacities or fighting in the armies of our allies. Some of them we shall not see again and there will never be another reunion, as in the old days, when the "Chief" came over from London to Brussels with work to be done. But the bright light of kindly human service which brought them all together is still aflame and will always be an inspiration to those who served, however humbly, in the great work.

A Journal From Our Legation In Belgium

BRUSSELS, July 4, 1914.—After years of hard work and revolutions and wars and rumours of war, the change to this quiet post has been most welcome and I have wallowed in the luxury of having time to play.

For the last year or two I have looked forward to just such a post as this, where nothing ever happens, where there is no earthly chance of being called out of bed in the middle of the night to see the human race brawling over its differences. When pounding along in the small hours of the night, nearly dead with fatigue, I have thought that I should like to have a long assignment to just such a post and become a diplomatic Lotos Eater. And at first it was great fun.

That phase lasted until I had had a thorough rest, and then the longing for something more active began to manifest itself.

I sat down and wrote to the Department of State that while I greatly appreciated having been sent to this much-coveted post I was ready whenever there might be need of my services to go where there was work to be done.

July 28, 1914.—Well, the roof has fallen in. War was declared this afternoon by Austria. The town is seething with excitement and everybody seems to realise how near they are to the big stage. Three classes of reserves have already been called to the colours to defend Belgian neutrality. A general mobilisation is prepared and may be declared at any time. The Bourse has been closed to prevent too much play on the situation, and let things steady themselves. In every other way the hatches have been battened down and preparations made for heavy weather.

To-night the streets are crowded and demonstrations for and against war are being held. The Socialists have Jaurés, their French leader, up from Paris, and have him haranguing an anti-war demonstration in the Grande Place, where a tremendous crowd has collected. Nobody on earth can see where it will all lead. England is trying hard to localise the conflict, and has valuable help. If she does not succeed * * *

An advance guard of tourists is arriving from France, Germany, and Switzerland, and a lot of them drop in for advice as to whether it is safe for them to go to various places in Europe. And most of them seem to feel that we really have authoritative information as to what the next few days are to bring forth, and resent the fact that we are too disobliging to tell them the inside news. A deluge of this sort would be easier for a full-sized Embassy to grapple with, but as Belgium is one of those places where nothing ever happens we have the smallest possible organisation, consisting on a peace basis of the Minister and myself, with one clerk. We shall have somehow to build up an emergency force to meet the situation.

July 30th.—No line on the future yet. Brussels is beginning to look warlike. Troops are beginning to appear. The railway stations have been occupied, and the Boy Scouts are swarming over the town as busy as bird dogs. A week ago there was hardly a tourist in Brussels....