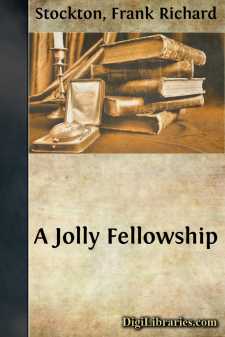 CHAPTER I. WE MAKE A START.

I was sitting on the deck of a Savannah steam-ship, which was lying at a dock in the East River, New York. I was waiting for young Rectus, and had already waited some time; which surprised me, because Rectus was, as a general thing, a very prompt fellow, who seldom kept people waiting. But it was probably impossible for him to regulate his own movements this time, for his father and mother were coming with him, to see him off.

I had no one there to see me off, but I did not care for that. I was sixteen years old, and felt quite like a man; whereas Rectus was only fourteen, and couldn't possibly feel like a man—unless his looks very much belied his feelings. My father and mother and sister lived in a small town some thirty miles from New York, and that was a very good reason for their not coming to the city just to see me sail away in a steam-ship. They took a good leave of me, though, before I left home.

I shall never forget how I first became acquainted with Rectus. About a couple of years before, he was a new boy in the academy at Willisville. One Saturday, a lot of us went down to the river to swim. Our favorite place was near an old wharf, which ran out into deep water, and a fellow could take a good dive there, when the tide was high. There were some of the smaller boys along that day, but they didn't dive any, and if they even swam, it was in shallow water near the shore, by the side of the wharf. But I think most of them spent their time wading about.

I was a good swimmer, and could dive very well. I was learning to swim under water, but had not done very much in that line at the time I speak of. We were nearly ready to come out, when I took a dive from a post on the end of the wharf, and then turned, under water, to swim in shore. I intended to try to keep under until I got into water shallow enough for me to touch bottom, and walk ashore. After half a dozen strokes, I felt for the bottom and my feet touched it. Then I raised my head, but I didn't raise it out of the water. It struck something hard.

In an instant I knew what had happened. There was a big mud-scow lying by the side of the wharf, and I had got under that! It was a great flat thing, ever so long and very wide. I knew I must get from under it as quickly as I could. Indeed, I could hardly hold my breath now. I waded along with my head bent down, but I didn't reach the side of it. Then I turned the other way, but my hands, which I held up, still touched nothing but the hard, slimy bottom of the scow. I must have been wading up and down the length of the thing. I was bewildered. I couldn't think which way to turn. I could only think of one thing. I would be drowned in less than a minute. Scott would be head of the class. My mother, and little Helen—but I can't tell what my thoughts were then. They were dreadful. But just as I was thinking of Helen and mother, I saw through the water some white things, not far from me. I knew by their looks that they were a boy's legs....