A Jolly by Josh 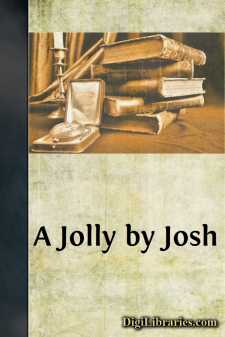 Dear Charlie,—Having a spare moment as I crossed the continent last time, I sat down in the rear end of a Lake Shore Limited train, and began to cast about me with a view to hitting upon some way of passing the time amicably with myself. As I looked about the car, I studied the faces and persons of my fellow-travellers, and found them uniformly uninteresting. My mind wandered from them out of the window, and I noted with a casual eye the advance civilization was making on both sides of the track. I began wandering vaguely from that back to the time when this was a trackless wilderness; and I pictured to myself the advent of the white man, and so on in an aimless sort of a way, from the beginning of our country until I reached the Declaration of Independence, the terms of which have always remained vividly impressed upon my mind.

“Life, liberty, and the pursuit of happiness!” That is what we are after. So it is. How ridiculous! Why don’t we think of it oftener? How many of us are free? How many of us are happy? And, particularly, how many of us would be any happier if we got the things we want? What foolish wants we have, anyway! Almost everybody wants something they don’t want.

Just then my eye caught sight of the official stenographer advertised as free. To an economical soul like mine the opportunity of having a free stenographer for a day and a half was too good to let slip by. So, placing my chair up alongside of his, I took from my pocket a letter which I had just received from my nephew, who had been spending his vacation in the West, and which I had not known exactly how to answer.

The train of thoughts in which I had indulged, and the peculiarly vacant condition of my mind, made the time favorable for expansion upon the theme which had occurred to me; and so I inflicted on the poor boy a long letter, or sermon, or essay, or whatever you may please to call it, which I am enclosing to you.

I know that you are interested in topics of this sort, and so send it along with an apology for the amount of your valuable time which I am so wilfully wasting.

Dear Tom,—I have just received your letter, asking if you could bring a pony back from Colorado. I answer most assuredly, “Yes”; that is, if you want to! But do you want to? This question having occurred to my mind, and perhaps not to yours, you must excuse my becoming a little long-winded if I launch out on a train of ideas which has presented itself to my mind.

Let me briefly serve up the circumstances that surround you, and perhaps I can paint them so that you will look at them from a new point of view.

You are eighteen years of age. You have lived surrounded by wealth and a good deal of luxury; but the luxury in which you were lapped was the comfort with which a man of great working brain, who has well earned the right to spend freely, chose to take for his own rest and amusement, knowing well the value of every cent he has spent or given away.

As the youngest of many sons, you have never had any responsibility; and yet your parents have left you with a taste for all kinds of expensive things, although, when you come to your money in a few years, you will have enough to gratify only a small part of the tastes which you have acquired....