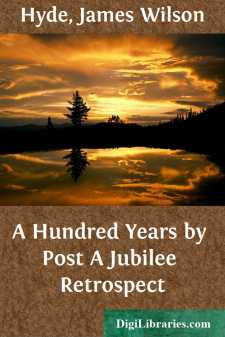 Were a former inhabitant of this country who had quitted the stage of life towards the close of last century to reappear in our midst, he could not fail to be struck with the wonderful changes which have taken place in the aspect of things; in the methods of performing the tasks of daily life; and in the character of our social system generally. Nor is it too much to say that he would see himself surrounded by a world full of enchantment, and that his senses of wonder and admiration would rival the feelings excited in youthful minds under the spell of books like Jules Verne's Journey to the Moon, or the ever-entertaining stories of the Arabian Nights. It is true that he would find the operations of nature going on as before. The dewdrop and the blade of grass, sunshine and shower, the movements of the tides, and the revolutions of the heavenly bodies; these would still appear to be the same. But almost everything to which man had been wont to put his hand would appear to bear the impress of some other hand; and a hundred avenues of thought opening to his bewildered sense would consign his inward man to the education of a second childhood.

So fruitful has been the nineteenth century in discovery and invention, and so astounding the advancement made, that it is only by stopping in our madding haste and looking back that we can realise how different the present is from the past. Yet to our imaginary friend's astonished perception, nothing, we venture to think, would come with greater force than the contrast between the means available for keeping up communications in his day and in our own. We are used to see trains coursing on the iron way at a speed of fifty or sixty miles an hour; steamships moving on every sea, defiant of tide and wind, at the rate of fifteen or twenty miles an hour; and the electric telegraph outstripping all else, and practically annihilating time and space.

But how different was the state of things at the close of the eighteenth century! The only means then available for home communications—that is for letters, etc.—were the Foot Messenger, the Horse Express, and the Mail Coach; and for communication with places beyond the sea, sailing-ships.

The condition of things as then existing, and as reflected upon society, is thus summed up by Mackenzie in his History of the Nineteenth Century: "Men had scarcely the means to go from home beyond such trivial distance as they were able to accomplish on foot. Human society was composed of a multitude of little communities, dwelling apart, mutually ignorant, and therefore cherishing mutual antipathies."

And when persons did venture away from home, in the capacity of travellers, the entertainment they received in the hostelries, even in some of the larger towns, seems now rather remarkable. If anything surprises the traveller of these latter days, in regard to hotel accommodation, when business or pleasure takes him from the bosom of his family, it is the sumptuous character of the palaces in all the principal towns of all civilised countries wherein he may be received, and where he may make his temporary abode. To persons used to such comforts, the accommodation of the last century would excite surprise in quite another direction. Here is a description of the inn accommodation of Edinburgh, furnished by Captain Topham, who visited Edinburgh in 1774: "On my first arrival, my companion and self, after the fatigue of a long day's journey, were landed at one of these stable-keepers (for they have modesty enough to give themselves no higher denomination) in a part of the town called the Pleasance; and, on entering the house, we were conducted by a poor devil of a girl, without shoes or stockings, and with only a single linsey-woolsey petticoat which just reached half-way to her ankles, into a room where about twenty Scotch drovers had been regaling themselves with whisky and potatoes. You may guess our amazement when we were informed that this was the best inn in the metropolis—that we could have no beds unless we had an inclination to sleep together, and in the same room with the company which a stage-coach had that moment discharged."

Before proceeding further, let us look at some of the circumstances which were characteristic of the period with which we are dealing....