A Hundred Anecdotes of Animals 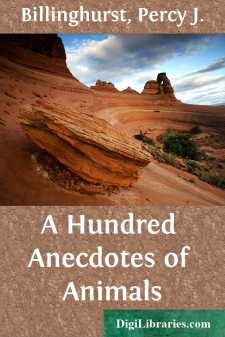 An elephant, from some motive of revenge, killed his cornack, or conductor. The man’s wife, who beheld the dreadful scene, took her two children, and threw them at the feet of the enraged animal, saying, “Since you have slain my husband, take my life also, as well as that of my children.” The elephant instantly stopped, relented, and as if stung with remorse, took up the eldest boy with his trunk, placed him on its neck, adopted him for his cornack, and would never afterwards allow any other person to mount it.

One of the magistrates in Harbour Grace, in Newfoundland, had an old dog of the regular web-footed species peculiar to that island, who was in the habit of carrying a lantern before his master at night, as steadily as the most attentive servant could do, stopping short when his master made a stop, and proceeding when he saw him disposed to follow. If his master was absent from home, on the lantern being fixed to his mouth, and the command given, “Go fetch thy master,” he would immediately set off and proceed directly to the town, which lay at the distance of more than a mile from the place of his master’s residence: he would then stop at the door of every house which he knew his master was in the habit of frequenting, and laying down his lantern, growl and strike the door, making all the noise in his power until it was opened; if his master was not there, he would proceed farther in the same manner, until he had found him. If he had accompanied him only once into a house, this was sufficient to induce him to take that house in his round.

A magpie, belonging to a barber at Rome, could imitate to a nicety almost every word it heard. Some trumpets happened one day to be sounded before the shop, and for a day or two afterwards the magpie was quite mute, and seemed pensive and melancholy. All who knew it were greatly surprised at its silence; and it was supposed that the sound of the trumpets had so stunned it, as to deprive it at once of both voice and hearing. It soon appeared, however, that this was far from being the case; for the bird had been all the time occupied in profound meditation, studying how to imitate the sound of the trumpets; and when at last master of it, the magpie, to the astonishment of all its friends, suddenly broke its long silence, by a perfect imitation of the flourish of trumpets it had heard; observing with the greatest exactness all the repetitions, stops, and changes. The acquisition of this lesson had, however, exhausted the whole of the magpie’s stock of intellect; for it made it forget everything it had learned before.

A gardener, in removing some rubbish, discovered two ground toads of an uncommon size, weighing no less than seven pounds. On finding them, he was surprised to see that one of them got upon the back of the other, and both proceeded to move slowly on the ground towards a place of retreat; upon further examination he found that the one on the back of the other had received a severe contusion from his spade, and was rendered unable to get away, without the assistance of its companion!