A Houseful of Girls 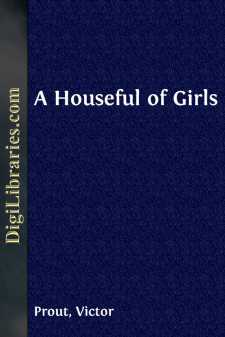 Half a Dozen Daughters.

There were six of them altogether—six great big girls,—and they lived in a great big house, in the middle of a long high road, one end of which loses itself in London town, while the other goes stretching away over the county of Hertford. Years ago, John Gilpin had ridden his famous race down that very road, and Christabel loved to look out of her bedroom window and imagine that she saw him flying along, with his poor bald head bared to the breeze, and the bottles swinging on either side. She had cut a picture of him out of a book and tacked it on her wall, for, as she explained to Agatha, her special sister, she felt it a duty to support “local talent,” and, so far as she could discover, Gilpin was the only celebrity who had ever patronised the neighbourhood.

Christabel was the youngest of the family—a position which, as every one knows, is only second in importance to that of the eldest, and, in this instance, Maud was so sweet and unassuming that the haughty young person of fourteen ruled her with a rod of iron.

Fair-haired Lilias was a full-fledged young lady, and Nan had had all her dresses let down, and was supposed to have her hair up; but as a matter of fact it was more often down than not, for it was heavy and plentiful, and Nan’s ten thumbs could by no chance fasten it securely. Hair-pins littered the schoolroom floor, hair-pins stood out aggressively against the white paint on the stairs, hair-pins nestled in the little creases of velvet chairs: there were hair-pins, hair-pins everywhere, except just where they should have been—on Nan’s dressing-table; and here there was such a dearth of these useful articles, that on one memorable occasion she had been compelled to effect a coiffure with the aid of a piece of string and a broken comb. The effect was striking for a good ten minutes, and then came the inevitable collapse; but, “Dear me,” as Nan observed, “accidents will happen, and what is the use of making a fuss about a thing like that, when the world is full of suffering!”

Elsie thanked her stars that she was only sixteen, and need not be “grown-up” for two long years to come; but when her younger sisters grew obtrusive, she suddenly remembered that she would be seventeen in three months’ time, and would have them know that she was to be treated with respect; and, in spite of daily discussions, feuds, and battles, the girls all loved each other dearly, and believed that such a charming and highly endowed family had never before existed in the annals of Christendom.

As a matter of fact, the Rendell girls had claim to one great distinction—promiscuous accomplishments had been discarded in their case, and each had been brought up to do some one thing well. Maud was musical, and practised scales two hours a day as a preliminary before settling down for another two or three hours of sonatas and fugues. Elsie locked herself in her bedroom for a like period, and the wails of her violin came floating downstairs like the lament of a lost soul....