A History of the United States 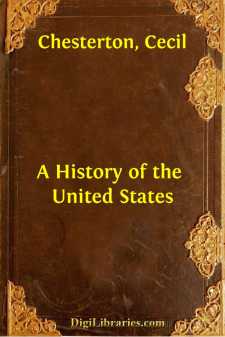 The author of this book, my brother, died in a French military hospital of the effects of exposure in the last fierce fighting that broke the Prussian power over Christendom; fighting for which he had volunteered after being invalided home. Any notes I can jot down about him must necessarily seem jerky and incongruous; for in such a relation memory is a medley of generalisation and detail, not to be uttered in words. One thing at least may fitly be said here. Before he died he did at least two things that he desired. One may seem much greater than the other; but he would not have shrunk from naming them together. He saw the end of an empire that was the nightmare of the nations; but I believe it pleased him almost as much that he had been able, often in the intervals of bitter warfare and by the aid of a brilliant memory, to put together these pages on the history, so necessary and so strangely neglected, of the great democracy which he never patronised, which he not only loved but honoured.

Cecil Edward Chesterton was born on November 12, 1879; and there is a special if a secondary sense in which we may use the phrase that he was born a fighter. It may seem in some sad fashion a flippancy to say that he argued from his very cradle. It is certainly, in the same sad fashion, a comfort, to remember one truth about our relations: that we perpetually argued and that we never quarrelled. In a sense it was the psychological truth, I fancy, that we never quarrelled because we always argued. His lucidity and love of truth kept things so much on the level of logic, that the rest of our relations remained, thank God, in solid sympathy; long before that later time when, in substance, our argument had become an agreement. Nor, I think, was the process valueless; for at least we learnt how to argue in defence of our agreement. But the retrospect is only worth a thought now, because it illustrates a duality which seemed to him, and is, very simple; but to many is baffling in its very simplicity. When I say his weapon was logic, it will be currently confused with formality or even frigidity: a silly superstition always pictures the logician as a pale-faced prig. He was a living proof, a very living proof, that the precise contrary is the case. In fact it is generally the warmer and more sanguine sort of man who has an appetite for abstract definitions and even abstract distinctions. He had all the debating dexterity of a genial and generous man like Charles Fox. He could command that more than legal clarity and closeness which really marked the legal arguments of a genial and generous man like Danton. In his wonderfully courageous public speaking, he rather preferred being a debator to being an orator; in a sense he maintained that no man had a right to be an orator without first being a debater. Eloquence, he said, had its proper place when reason had proved a thing to be right, and it was necessary to give men the courage to do what was right. I think he never needed any man's eloquence to give him that. But the substitution of sentiment for reason, in the proper place for reason, affected him "as musicians are affected by a false note." It was the combination of this intellectual integrity with extraordinary warmth and simplicity in the affections that made the point of his personality. The snobs and servile apologists of the régime he resisted seem to think they can atone for being hard-hearted by being soft-headed. He reversed, if ever a man did, that relation in the organs. The opposite condition really covers all that can be said of him in this brief study; it is the clue not only to his character but to his career.

If rationalism meant being rational (which it hardly ever does) he might at every stage of his life be called a red-hot rationalist. Thus, for instance, he very early became a Socialist and joined the Fabian Society, on the executive of which he played a prominent part for some years. But he afterwards gave the explanation, very characteristic for those who could understand it, that what he liked about the Fabian sort of Socialism was its hardness. He meant intellectual hardness; the fact that the society avoided sentimentalism, and dealt in affirmations and not mere associations. He meant that upon the Fabian basis a Socialist was bound to believe in Socialism, but not in sandals, free love, bookbinding, and immediate disarmament. But he also added that, while he liked their hardness, he disliked their moderation. In other words, when he discovered, or believed that he discovered, that their intellectual hardness was combined with moral hardness, or rather moral deadness, he felt all the intellectual ice melted by a moral flame. He had, so to speak, a reaction of emotional realism, in which he saw, as suddenly as simple men can see simple truths, the potterers of Social Reform as the plotters of the Servile State....