A History of the McGuffey Readers 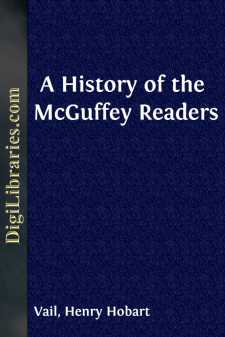 A History of the McGuffey Readers THE BOOKS.

Before me are four small books roughly bound in boards, the sides covered with paper. On the reverse of the title pages, two bear a copyright entry in the year 1836; the others were entered in 1837. They are the earliest editions of McGuffey's Eclectic Readers that have been found in a search lasting forty years.

They represent the first efforts in an educational and business enterprise that has for three-quarters of a century called for the best exertions of many skilled men, and in their several forms these books have taken a conspicuous part in the education of millions of the citizens of this country.

But what interest can the history of the McGuffey Eclectic Readers have to those who did not use these books in their school career? Their story differs from that of other readers since in successive forms, adjusted more or less perfectly to the changing demands of the schools, they attained a wider and more prolonged use than has been accorded to any other series.

By custom and under sanction of law certain studies are pursued in the common schools of every state. Spelling, reading, writing, arithmetic, geography, history, grammar, civics and physiology are the subjects usually taught. The school authorities select the textbooks which shall be used in each subject. The readers are the only texts used in all schools affording opportunity for distinct ethical teaching. The history of our country should give ideas of patriotism; the civics should contain the primary notions of government; the physiologies should instruct the pupils in the laws of health; but the reader should cover the whole field of morals and manners and in language that will impress their teaching indelibly upon the mind of every pupil. While the chief aim of the school readers must be to teach the child to apprehend thought from the printed page and convey this thought to the attentive listener with precision, these efforts should be exerted upon thoughts that have permanent value. No other texts used in the school room bear directly and positively upon the formation of character in the pupils. The school readers are the proper and indispensable texts for teaching true patriotism, integrity, honesty, industry, temperance, courage, politeness, and all other moral and intellectual virtues. In these books every lesson should have a distinct purpose in view, and the final aim should be to establish in the pupils high moral principles which are at the foundation of character.

The literature of the English language is rich in material suited to this intent; no other language is better endowed. This material is fresh to every pupil, no matter how familiar it may be to teacher or parent. Although some of it has been in print for three centuries, it is true and beautiful today.

President Eliot has said, "When we teach a child to read, our primary aim is not to enable it to decipher a way-bill or a receipt, but to kindle its imagination, enlarge its vision and open for it the avenues of knowledge." Knowledge gives power, which may be exerted for good or for evil....